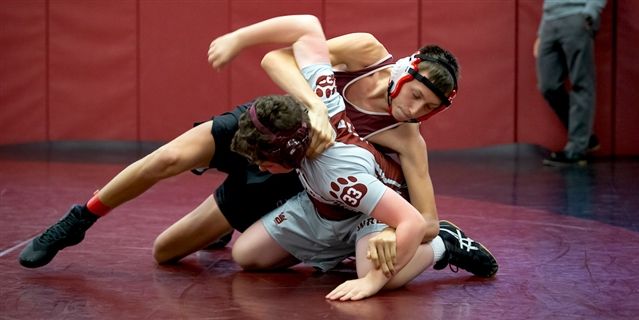 Fay Wrestling on the Rise

Erin Ash Sullivan
With a growing team and another successful season under its belt, Fay’s wrestling team is on the rise, calling to mind the team’s days of dominance at the end of the 20th century.
The Fay wrestling team is no stranger to dominating on the mat. Founded in 1968, the program achieved consecutive winning seasons through 2008 and has won 10 New England Junior Prep Wrestling Association (NEJPWA) Championships.
After some years of rebuilding, the team is again on a roll. Under the guidance of Head Coach Eric Lane, the 2018-2019 team boasted 32 wrestlers who competed in nine tournaments over the course of the 11-week season, winning a total of 226 matches and notching 153 pins (for the uninitiated, a “pin” is when the wrestler wins the match regardless of the score by holding the opponent down with both shoulder blades on the mat).
Among the season’s highlights was the team’s third place finish (out of 20 teams) at the state sectionals of the Massachusetts Youth Wrestling Association. Another highlight was the team’s performance at the 50th annual Fessenden Wrestling Tournament this February. This tournament served as the New England Jr. Prep Wrestling Championships and included over 160 participants, with each school sending their top 12 wrestlers to compete. At the event, eight of Fay's wrestlers placed, leading the team to a fourth-place finish out of the 14 teams attending the event. The 123 team points scored was the highest team point score for Fay in the past eight years.
What caused the tide to turn? According to Eric Lane, the three-part answer was simple—once he figured it out. Start earlier. Recruit more wrestlers. And give those wrestlers more opportunities to compete.
“I began to see that other schools who were winning matches had seventh graders who had already been wrestling for a number of years,” says Eric. “I realized that I needed to recruit more students in fifth and sixth grade, so they could learn the basics and get more experience before Upper School. So that’s what I did.”
Building the roster—at both the Lower and Upper School levels—was not easy, Eric notes. Convincing students to try an unfamiliar sport that might be out of their comfort zone has posed a challenge. But increasing the numbers was important: “One way to become a better wrestler is to have a variety of people to train with,” notes Eric. “Back when we had only 15-16 kids, there simply weren’t enough students to practice against each other.” As soon as the roster inched above 30, says Eric, he started to observe a significant improvement in the wrestlers’ performance.
The third key—finding more opportunities to wrestle—has led Eric to open new doors. Within Fay’s independent school league, there are only four tournaments in the season—one for the younger wrestlers and three competitive league competitions. By participating in the Massachusetts Youth Wrestling Association Tournaments this year, Eric was able to dramatically increase the number of matches each wrestler could take on. “You wrestle more, you get better. It’s pretty simple,” he says.
A significant point of pride for Eric this year was the team’s sportsmanship. He notes that after the team’s Friday Night Lights match in January, the coach from a peer school made a point of sharing how impressed he was with the Fay wrestlers: “He was wowed by how supportive the team was for each other,” Eric says.
While Eric is pleased with the group’s growth so far, he is already thinking about how to continue the trajectory in the ’19- ’20 season. “I want the sport to grow,” he says. “I want 40 kids in the wrestling room, and I want more students in Lower School to think ‘Wow, I want to be a part of that.’ We're trending in that direction, and I hope we can be there soon.”

Everyone plays at Fay! Learn more about our athletics program.