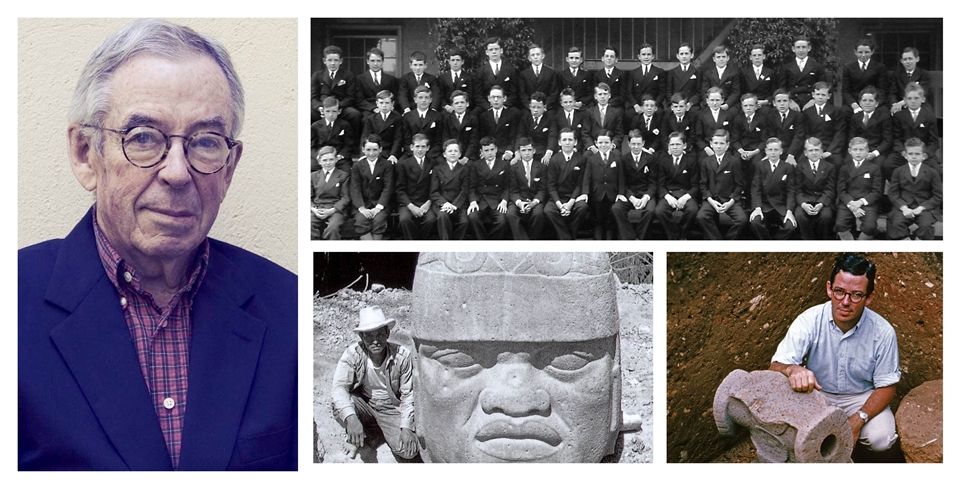 Supporting the Development of a Global Perspective: Michael Coe ’41

Professor Coe is one of the world's foremost experts in Mesoamerican culture.
When Michael Coe ’41 arrived at Fay in the fall of 1937, the world was on the verge of descending into the chaos of World War II. While Southborough was a relatively insulated place to spend the next four years, Dr. Coe is grateful that his teachers made sure that their students had an excellent grounding in civics and world history. “Fay was way ahead in teaching civics and geography,” he says. “The School gave us a great general education that prepared us to be U.S. citizens and citizens of the world.” In 1939, students started to arrive at Fay from Europe, brought there by families eager to remove them from the growing dangers of the Nazi threat. “There was a strong international presence at the school which gave us a real perspective on what was happening,” he adds.
Dr. Coe went on to become a leading archeologist and one of the world’s foremost experts in Mesoamerican culture. He is the Professor Emeritus of Anthropology and Curator Emeritus of the Peabody Museum of Natural History at Yale University. He has authored many papers and several books in his long career, including Breaking the Maya Code (1992), which was nominated for a National Book Award, and The True History of Chocolate (1996), a collaboration with his late wife, Sophie Coe.
Dr. Coe credits Fay with teaching him how to write well, and this experience is one of the reasons that he participates in Fay’s Planned Giving program and is a member of Fay’s 1866 Society. “I give because Fay really made me what I am. I learned to write there, which was really the most important part of my education,” he says. He points in particular to the efforts of English teacher Mrs. Elizabeth Benzaquin. “She taught me how to read and take notes, and all kinds of things that helped me tremendously when I went off to university.”
Dr. Coe is gratified to know that Fay students continue to receive a global education that is enriched by the presence and perspectives of students from around the world. “So many people these days haven’t the foggiest idea about where these places in the news are, and it doesn’t mean anything to them,” he says. “When we stop becoming world citizens, it really leads us down a terrible path.”

The 1866 Society honors those individuals who have helped ensure the continued vitality of Fay by providing a legacy gift to the School in their estate plans. Membership in the 1866 Society serves as an inspiration for all those who share Fay’s values and wish to make an invaluable contribution to securing Fay’s future. For information about the Society or legacy gift options, please contact Stephen Gray at sgray@fayschool.org or 508-490-8414.
Back