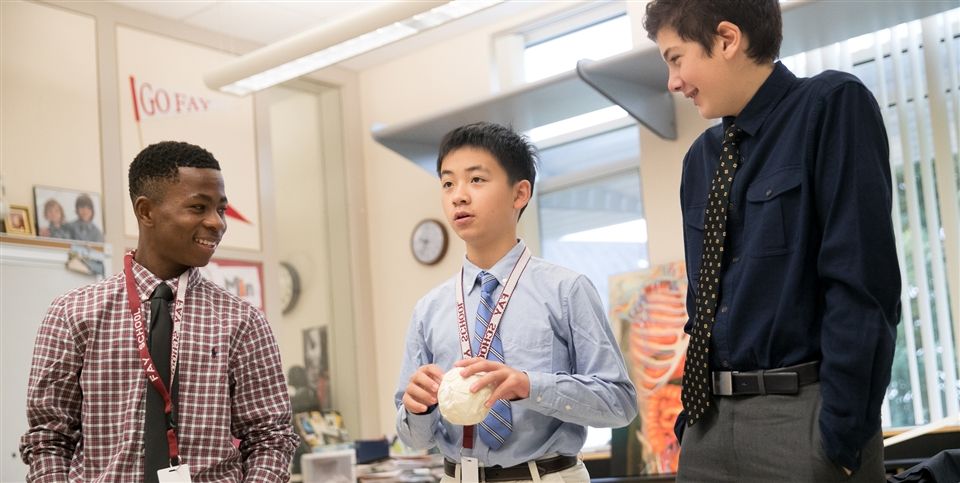 by Daintry Duffy Zaterka '88
The mission of the Upper School’s Community Connections group resonates particularly strongly this year, as students discuss issues of diversity and difference with openness and respect.
“Gaining Perspective” isn’t just the title of Fay’s schoolwide theme for this year. It’s also central to the mission of Community Connections, a student-led, faculty-advised workshop group whose goal is to encourage awareness and respect for people’s differences within the community.

Organized by faculty and facilitated by student leaders, Community Connections meets once or twice each month to discuss sensitive issues like student identity, diversity, and inclusion in a climate that encourages respectful and open listening and sharing. The Friday night meetings are open to the entire Upper School community, and students usually begin by sharing dinner and catching up with one another before the meeting begins.

Community Connections kicked off its first meeting this year by focusing on Fay’s schoolwide theme. The meeting started with a video that showed how an individual’s perception of an event can differ vastly depending on experience and identity. This was followed by a Rorschach card activity that asked students to describe what they saw in the amorphous shapes. Students were surprised by each other’s answers, but when each student explained his or her interpretation of the image, the other students found that they were suddenly able to see the same thing.

“The activity was a great illustration of how easy it is to get upset and defensive,” says teacher Sarah Ripton, “but when you take a moment, focus on being mindful, and listen, you may be able to see another perspective and begin a conversation.”

Students also participated in an activity where they wrote down the emotions prompted by different words. The words became more loaded as the activity progressed, starting with terms like “family” and “friendship” and moving on to concepts like “prejudice” or “racism.” Sarah noted that students who associated safety and security with the word “police” were intrigued to hear other students express an alternate view. “It’s important for middle school students to have safe spaces for open, non- confrontational dialogue that builds understanding,” she says, noting that the ability to move beyond one’s own world view and see other perspectives is a developmental challenge common to all adolescents and young teens.

When a topic resonates strongly with the group, it can be hard to wrap the meetings up. A recent meeting on labels and prejudice, called “My Story,” produced energetic discussion as the students considered the assumptions they make about one another on a daily basis and how misguided they can be. “We opened the meeting up for students to talk about their personal experiences, and they could have kept going until one in the morning!” Sarah notes with a laugh.

While the exchanges are lively, Community Connections is more than just an outlet for discussion, and the group is also focused on countering problems with positive action. After the meeting about labels, the students created a Graffiti Peace Wall, a visual riot of positive ideas and actionable steps that students can take when they encounter offensive speech, behavior, or ideas. “We want to move students away from the idea that they don’t have the power to fix these things,” says Sarah. “It’s important for students to have a voice and a sense of control.”

After a recent meeting, Community Connections student- leader Zahaan Khalid ’18 was moved to send a note to the faculty coordinators, suggesting that the group is certainly meeting that goal. “Thank you so much for an amazing workshop today,” he wrote. “I feel like I got to say things I felt that I have not necessarily been able to express. I am glad that I was able to express myself in an environment where people listen and relate rather than judge and differentiate. I am grateful and proud to be a leader in these workshops, and I feel very heard.”
Back