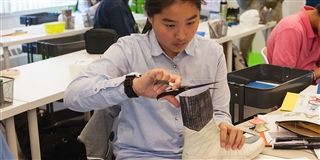 Aspiring Upper School designers create sneakers for Converse in our Innovation Lab
Do you like to travel? Imagine getting sent to Iceland to admire modernist architecture under the midnight sun. If you’re into cars, you could spend a week at Aston Martin in the U.K. living out James Bond fantasies while immersing yourself in one of the world’s most iconic car brands. Love fashion? You’d travel to Paris and Milan to spend a week with the top designers at Chanel and Prada. In return for any one of these dream trips you have only one responsibility: get inspired!
That was the message from Peter Hudson, VP of Global Design & Innovation at Converse, to Upper School students who participated in Fay’s Sneaker Design Club this spring. Organized by Director of Innovation David Dixon, the club was a collaborative design project between Fay students and the Converse shoe company.
Twenty-four Upper School students with an interest in design spent nine weeks immersed in the athletic shoe design process, from inspiration to prototype.
The design challenge: to develop an “all- round” sports shoe targeted to the teenage market that incorporates smart technology. Peter Hudson (who is the father of Grace ’15, Hannah ’17, and Sarah ’20) provided the group with Converse shoe “lasts” (the solid forms around which Converse sneakers are designed), materials to incorporate in their designs, and, most importantly, the wisdom and expertise of 24 years in the design field. “From the first meeting, Peter made the connection between school and the real-world environment of a designer,” says David.
At the club’s first meeting, Peter shared some of the key personality traits for a successful designer:
• Designers are inspired by the world around them. Peter sends his Converse designers on “inspiration trips” around the world twice a year to keep them energized and their ideas fresh. “If you’re a designer and you’re stuck in a box, then you’re not getting fueled with ideas and creativity.”
• Designers are born critics who look at everything and believe they could make it better.
• Designers must be willing to swim upstream. “The world will say ‘No!’ but designers, engineers, and thinkers have to say ‘Why not?’” says Peter, advising students to stay passionate about their ideas.
• Designers have to work well with the team.  “I don’t make 90 million pairs of Chuck Taylors personally,” says Peter, “so I work with people in marketing, advertising, and engineering. As a designer, you are part of a team, and you have to embrace that.”
• Designers have to sketch. Designers don’t have to be accomplished artists— though it helps—but they have to build on their ideas by getting them down on paper.
• Designers have to be consumer-obsessed.  “A lot of product goes into landfill,” says Peter,  “so you have to design products that are meaningful to consumers.”
Like “real” designers, the Fay designers began by making ‘lifestyle’ boards focusing on the teenage customer. They cut out images from magazines to represent their interests, including clothing, sports, and technology. They also created ‘mood’ boards with colors, textiles, and images to evoke an atmosphere. “They looked at a broad range of items—textiles, technology, cars, sculpture, flowers, geometric patterns—as a springboard to produce original ideas,” explains David.
The Fay designers then faced the challenge of refining those ideas down to the most critical design components. In order to help students’ ideas flow, David presented a speed-sketching exercise: using templates from Pensole, an online footwear design academy, each designer had five minutes to produce a single sketch for a running or basketball shoe. Within an hour, students had created several shoe sketches.
Ready to begin designing, students waded through the array of materials provided
by Peter to find just the right color combinations and fabric styles. Some chose fabrics for strength, color and texture, while others sought qualities like iridescence. At this stage, each student produced three or four detailed drawings, ultimately choosing one to make into a form and present to Peter and the club.
Using techniques gleaned from a YouTube video, students learned how to tape up a shoe last in masking tape—a technique used by real designers—onto which they could then draw and color their design. In a real sneaker design process, the panels would then be cut away with a craft knife and sent with detailed information to a seamstress, who would sew a model of the shoe’s upper.
The students presented their work to Peter during their final class. The final designs represented a wide array of ideas, including self-tying sneakers for the teen who can’t be bothered, sneakers with removable outsoles for different terrains, even sneakers inspired by the Reinke indoor turf field. “I was surprised by the complexity, maturity, and ambition of some of the students, as well as their self-discipline,” says David.
Peter, on the other hand, was impressed but not surprised by the hard work and originality reflected in the designs. “All of you wanted to do the work,” he says, “and when you’re passionate about something, you’re already halfway there.”
Back
ABOUT
FAST FACTS
MISSION & PHILOSOPHY
FACULTY & STAFF
CONTACT
WORKING AT FAY
CALENDAR
BLOG
PRIVACY POLICY
ADMISSION
ADMISSION EVENTS
APPLY
AFFORDING FAY
VISITING CAMPUS
PROGRAM
ACADEMICS
ATHLETICS
ARTS
BOARDING
ENGLISH LANGUAGE PROGRAM
SECONDARY SCHOOL COUNSELING
DIVERSITY, EQUITY, AND INCLUSION
DISTINCTIONS
CREATIVITY AND DESIGN PROGRAM
PUBLIC SPEAKING
CHARACTER MATTERS
CIRCLES OF CONNECTION
GLOBAL COMMUNITY
LEADERSHIP
NINTH GRADE PROGRAM
DEDICATED SERVICE
48 MAIN STREET
SOUTHBOROUGH, MA 01772
main number 508-490-8250
admission 508-490-8201