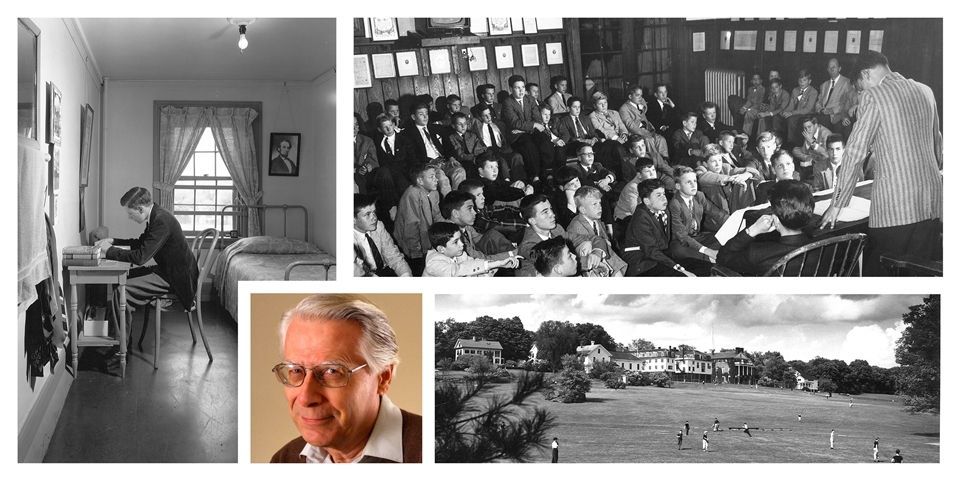 Erin Ash Sullivan
As news of COVID-19 vaccines dominates the headlines, we're reminded of how the science of immunology and vaccine development have transformed the modern world. What you probably don’t know is that the vaccine responsible for nearly eradicating measles from most developed countries can be traced back to Fay School, to one boy, and to one measles outbreak during the winter of 1953-54.
In the fall of 1953, ten year-old David Edmonston left his home in Bethesda, Maryland, and headed north to Fay School. He was a free-spirited, rather undisciplined boy, and his parents felt that Fay might be just the ticket to instill some structure and focus.
Arrival to campus was a shock to David’s system. The dorm master led him into Old Main (Fay’s original building, demolished in 1986), up the stairs, and into a tiny alcove, barely six feet across. There was just enough room for a narrow bed and a dresser, and a curtain drawn across the doorway allowed for a modicum of privacy.
It was a whole new world. Fay’s regimented days were quite different from David’s free-wheeling way of doing things, and everything felt foreign, from long hours in the school room to interrogations by the stern headmaster, Harrison Reinke. But there were also new experiences to discover and enjoy: reading about the Knights of the Round Table in a literature class, learning to calculate fractions in Mr. Shields’ class, going skeet shooting for the first time, playing on a soccer team, attending chapel services at St. Mark’s.
That winter, just as he was adjusting to the challenges and pleasures of his new life, David fell ill. There was a measles outbreak—not an uncommon occurrence in those days, when nearly every child in the United States got measles by age 15 and the disease killed around 450 people a year.
David was sent to the infirmary, which at the time was located on the floors above the Dining Room. He was kept out of contact with the other boys, and though the nurses were kind, he was lonely and bored.
Twenty-five miles away, at Children’s Hospital in Boston, Dr. John Enders and Dr. Thomas Peebles were men on a mission—to be the first to isolate the measles virus. Enders was a groundbreaking scientist who would win the 1954 Nobel Prize for work that ultimately led to Jonas Salk’s development of the polio vaccine. Peebles was a newly minted pediatrician, just two years out of Harvard Medical School.
One morning in the winter of 1954, Enders got word from a colleague that there was an outbreak of measles at Fay School in Southborough, a boys’ junior boarding school not too far from the hospital. Would Enders be interested in getting some samples from the sick students?
No time to waste: Enders sent Peebles directly out to Fay.
David was surprised to meet the doctor from Boston, who asked him politely for permission to take blood samples and throat swabs. David agreed, intrigued by the request and vaguely aware that the doctor was up to something important. Peebles took the samples and went away. Not long after that, the doctor returned to get more samples and to share some exciting news. He told David that he and his colleagues had identified the measles virus in his samples and that doctors were isolating it in order to develop a vaccine. They were confident it would work.
That was the last time David heard anything about Peebles’ and Enders’ research for several years, and as far as he knew, the story was over. David got better, and spring came to Fay. He threw himself into classes and activities, even winning third place in the Founders’ Day sack race. When the year was through, his parents brought him back to Bethesda to finish his schooling closer to home.
It had been a year of growth and learning at Fay, and his bout with the measles was just a small part of his tale.
Little did David know that his case of measles—and his fateful meeting with Dr. Peebles—were the starting points in a scientific discovery that changed the course of world history.
After Peebles identified the virus in David’s samples, Enders continued with the work. He grew a strain of measles— named the Edmonston-B strain, after David—that he developed into a measles vaccine. In 1961, The New York Times proclaimed the new vaccine “100% effective,” and in 1963, a licensed measles vaccine was introduced to the public.

David met the doctors one more time, in March, 1963, just after the launch of the new vaccine. CBS sent him a free ticket from Washington to New York in order to appear on a special news program hosted by the well-known anchor Charles Collingwood and featuring Dr. Peebles and Dr. Enders. David, who by then was in his late teens, was delighted with his whirlwind trip to New York and brief brush with fame, though a bit disappointed that the elegant hotel restaurant didn’t serve pizza.
In the following decades, the measles vaccine became a juggernaut. Millions of children and adults around the world have been inoculated since the vaccine’s creation, 52 years ago. In 2000, the United States declared that measles had been eliminated from this country (in this case, “eliminated” is defined as the absence of continuous disease transmission for 12 months or more in a specific geographic area).
While other effective measles strains have been developed in past years, many of those were derived from the Edmonston-B strain. According to the Centers for Disease Control, even today, a modified version of the strain, called the Edmonston-Enders strain, is the measles component of the MMR (measles, mumps, rubella) vaccine that most American children receive.
Like the “immortal” Henrietta Lacks, whose cells have lived on in the HeLa cells found in every research lab, David Edmonston’s case of measles from the winter of 1954 was the beginning of a momentous story that continues today. All of us who were inoculated against the disease have a little bit of Fay in our blood.
What Happened Next
David Edmonston graciously spoke with us at length about his year at Fay and his memories of the development of the measles vaccine. As he pointed out in our conversation, this chapter in his life was one that happened “to” him, rather than an event in which he had an active role. What happened next to David Edmonston is just as fascinating.
After graduating from high school in Bethesda, David pursued studies at a local community college, later transferring to Earlham College, a Quaker college in Indiana. It was there that he met the Reverend James Bevel, a leader of the Southern Christian Leadership Conference and close advisor to Dr. Martin Luther King, Jr. “I was galvanized by his blunt enthusiasm for civil rights,” David recalls, “and I wanted to support the movement and learn from these dynamic people.”
In September 1964, David joined the Student Nonviolent Coordinating Committee (SNCC) and headed for Mississippi. He remembers, “That June, three civil rights workers [James Chaney, Andrew Goodman, and Michael Schwerner] had been murdered in Neshoba County. I can only imagine the fear my parents must have felt when I told them of my decision, and yet they supported my plan.”
For the next nine months, David was actively involved in the Civil Rights Movement. He started a “freedom school” to teach black teens about the history of slavery and the culture of oppression. He went door-to-door encouraging black residents to register to vote and provided one-on-one tutoring to prepare for the accompanying literacy tests that had not yet been abolished. After participating in a freedom march in Jackson, Mississippi, he was arrested and spent four days in prison. He headed north in June of 1965, and soon thereafter the federal Voting Rights Act was passed and the literacy tests were outlawed. “My experiences in Mississippi increased my perception of human worth,” David says. “They showed me what could be accomplished when many people acted non-violently but boldly, with a united purpose.”
As a young adult, David discovered the passion for learning that had eluded him in earlier years. “Learning became one of my great loves,” he says, and he went on to share his passion for knowledge as a high school science teacher. He later went into construction, and he notes that Mr. Shields’ fraction lessons stood him in good stead when he became a carpenter and cabinetmaker.
Perhaps most noteworthy, David’s spirit of inquiry has manifested itself in a life-long focus on spirituality and mysticism. Over the years, he has pursued his study of meditation and the divine, visiting India numerous times. Now retired and living in rural Virginia, David relishes his role as a “seeker” and seizes every opportunity to continue to learn and expand his horizons.
Back