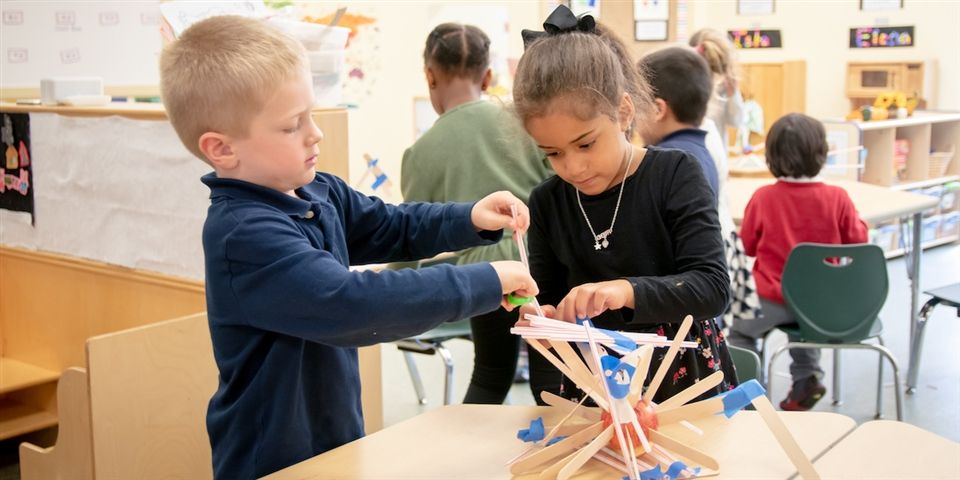 Primary School Update: Build With Me

by Daintry Duffy Zaterka '88
Building isn’t “just” building when Primary School students apply the principles of creativity and design.
If Stanford design students can do it, then so can Fay’s Primary Schoolers!
Our youngest students do a deep dive into creative problem solving early on with hands-on projects that challenge them to employ the design thinking process originally developed at Stanford University. Design and Technology teacher Andrew Shirley visited the Primary School this fall to introduce students to the process. “Design thinking gives students a structured way to identify problems, come up with a plan, evaluate how the plan is going, and make adjustments as they go,” he says. In short, he’s teaching them to ask, imagine, plan, create, and improve.

Ask: What is the problem?


Students began by brainstorming problems they had seen. One student, whose family is expecting a new baby, recognized that the new addition would also add to the workload around the house, so she designed “The Babyhelper 4000” to pitch in. To ease the nightly dinner routine, another student invented a cooking robot with one arm to hold trays, another with an oven mitt, and a third brandishing a spatula.

Imagine: What could the solutions be?

One challenge of design thinking for younger students
is understanding that a problem can have multiple solutions and that the first idea might not always be the best. “We encourage students to generate multiple designs for each project,” says second grade teacher Katie Farrar. “Then they have to choose the best one.”
The open-ended nature of these projects can be exciting for students who are used to defined tasks. After reading Iggy Peck, Architect by Andrea Beaty, Kindergarteners and second graders worked in pairs to build the tallest tower possible out of spaghetti and play-dough or marshmallows. Students were fascinated to walk around the room and see how their classmates approached the problem in entirely different ways.


Working in teams to solve problems collaboratively offers additional opportunities for growth. This fall, second graders worked in groups of five to build communities out of cardboard and recycled materials. Each group chose the kind of community they wanted to build (rural, urban, or suburban) and then had to create spaces for people to work, live, play, and solve problems. “The challenge was agreeing on the kind of community everyone wanted,” says Katie. “That’s very hard at seven years old because all of the students have opinions, and they all want to be heard.” Students talk openly about compromise and collaboration, and they have to figure out how to work through disagreements.

“Building is a great equalizer,” says Kindergarten teacher Anne Canada. “It allows each child to find success in a different way.”Fresh off an apple-picking excursion, Kindergarteners were challenged to build a tower that would support one large apple using only tape, popsicle sticks, and straws.
In another example, second graders made “Place Value Monsters” using blocks that each had a value of 1, 10, 100, or 1000. Each student had to hit at least a three or four-digit number with their animal and then figure out the exact “value” of their creature. “The project reinforced the math content while allowing students to be creative and problem-solve,” says Katie Farrar.
Improve: Can I make it better?

While assessing their work with a critical eye is challenging for Kindergarteners, over time, building, testing, and redesigning becomes a habit.
This fall, for example, Primary students built bridges after reading the book 21 Elephants and Still Standing by April Jones Prince about the building of the Brooklyn Bridge. Using only popsicle sticks and paper cups, students had to build a bridge that would hold 21 mini bears or cubes. One group created an elaborate six-level bridge, while others had trouble creating a single layer. Every group had to test multiple solutions in order to find success.


Later this term, second graders will be building pinewood derby cars and tweaking their vehicles’ weight, design, and aerodynamic features to decrease the travel time down the ramp.
These projects help students understand that perfection is not the goal, notes first grade teacher Jill Gibbons. “One student this year said, ‘Practice makes progress!’” says Jill. “I love that because this is completely about the process.”
Kindergarten teacher Lillian Bogaert agrees. “The children definitely get frustrated when it’s not working,” she says. “But that’s good productive struggle. When it does work, it’s so much more exciting because they had to work so hard to get it right.”
Back