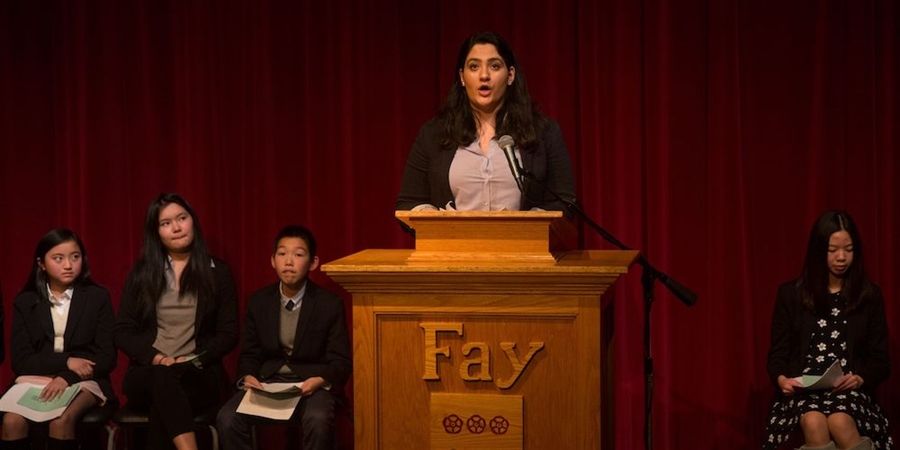 Learning the Power of My Voice: Nilufer Gulal '17

“I was lucky enough to be raised in a community where I was taught that I could do anything as a girl, be anything as a girl, and was given the opportunity to do so. I wish everybody could be like this, could have the same rights, could do the same things, could be free, because every girl deserves to be. Every girl living in this world deserves to go to school, to be safe, to be confident with their sexuality, to love themselves, and simply, to be happy; so this speech is for all the proud and strong women: for the women we love, for the women we respect, for the women we are.”
-   Nilufer Gulal, 2017, from her winning speech “Women of Strength”
Nilufer Gulal ‘17 recalls her time in the classroom and in the boarding program at Fay with great warmth. She mentions teachers, her advisor, her peers, and talks about the many friendships that are still going strong after graduation. “The student community at Fay has really stayed with me,” she shares. Coming from Bursa, in northwest Turkey, Nilufer knew her time in a New England boarding school would change her, but she did not realize how much. She reflects first on her time in Fay’s English Language Program, where she felt her English reading and writing skills grew tremendously. However, the social and intellectual connections she made with her peers that first year were equally important.  “I felt so prepared for classes after that program,” said Nilufer, “and I also made lifelong friendships with students from all over the world.”
After graduating from Choate Rosemary Hall in 2020, Nilufer enrolled at Barnard College in New York City.  She stayed connected with many of her Fay peers during her time in secondary school and continues to see them regularly in the city.  Since her enrollment at Barnard opens courses to her at Columbia University, Nilufer has been able to connect with Fay alumni there as well, even attending class with Derek Ng ’17.  It is this network of close friends and strong influences all over the world that represents, for Nilufer, one of the most powerful legacies of her Fay education.
The single most pivotal moment for Nilfur during her time at Fay was the 2017 Speech Contest. Having grown in confidence and skill with English by that point in her life at the school, Nilufer knew it was time to educate the community on an issue deeply important to her: women’s rights, especially those of Middle Eastern women.
“It was the guiding moment of my academic life,” Nilufer recalls. “So much of what I have written and studied since then can be traced to that speech.” At Choate, Nilufer focused on political science and economics with a specialization in Arabic and Middle Eastern Studies. Then, as when she was at Fay, her goal was to study the structural and root causes of women’s domestic and professional struggles. For Nilufer, change for women will only come through moral courage and frank discussion. In a particularly memorable Women’s Studies course at Choate, Nilufer explored the female experience in Turkey at even greater depth, tapping into her own and her family’s lived experience. Nilufer remains keenly aware, as she was delivering her speech at Fay, that sometimes people are uncomfortable hearing about these issues, but she has no intention of remaining silent.
Now a pre-law major, Nilufer continues to follow the path she can trace back to the Speech Contest at Fay.  “The structure of my classes and life at Fay,” says Nilufer, “started me on this path.”  Determined to continue to build her international experience and reach more and more women with her message, Nilufer plans to seek opportunities in nonprofits and organizations that seek to educate and liberate women. While she is not sure what final direction her career will take, she looks back on Fay's Choate Public Speaking Award as a transformative moment in her life, a moment where she learned just how powerful her voice could be.
Back