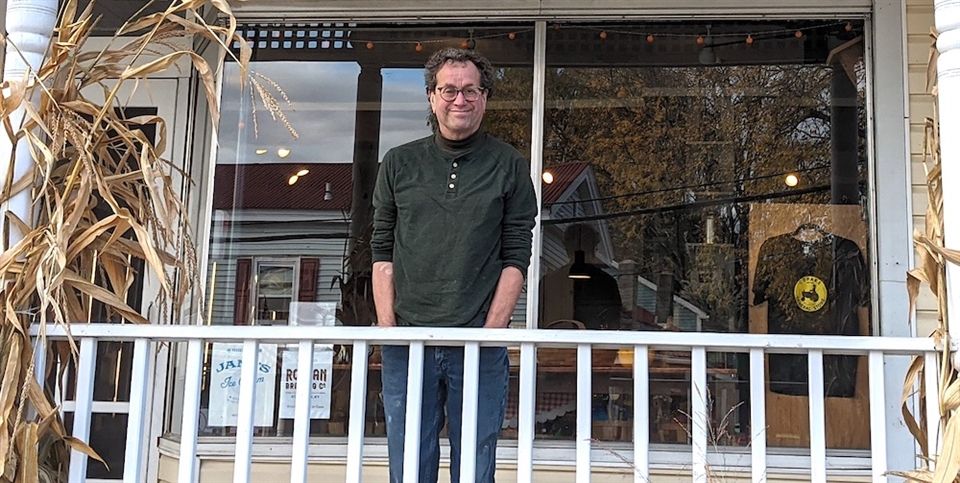 Daintry Duffy Zaterka '88
Writer Peter Richmond ’67 channels his passion for food and travel in a new and mouthwatering food blog.
Tucked away in the Berkshires, next to a Big Y Supermarket and a stone’s throw from a Mobil Station and car wash, is an unassuming little French charcuterie café and market called Bizalion’s. The baguettes are warm with a “crispy-crust” and a “yeasty-scented, airy soul.” The pâté is “worth dying for,” and the proprietors “source everything from their cheese to their cornichons to their chocolate with impressive discernment.” You’ve probably never been to this little gem in Great Barrington, Massachusetts, but if you follow Peter Richmond’s food blog, randomroadfood.com, you’ll want to make the trip.
Over his career, Peter has written nine books, including the New York Times bestseller The Glory Game. He spent fifteen years as a sportswriter for GQ, and he has interviewed hundreds of actors and athletes from George Clooney to Muhammad Ali for stories in The New Yorker, Vanity Fair, and Rolling Stone. In the latter half of his career, a lifelong fascination with education led him to spend three years teaching English, history, and drama at the Indian Mountain School. When Peter discovered that he had an affinity for teaching, he went on to pursue his M.A. in teaching and serve as an adjunct professor at Moravian College. Eventually, though, he tired of the four-hour commute between Moravian and his home in Millerton, New York.
He gave up teaching, but he wasn’t ready to give up the road—or the writing—just yet. The main streets and back roads of small-town America have always captured Peter’s imagination. The driving happens with Melissa Davis, his wife of 38 years, at his side. “We always take the back roads and never travel on an interstate,” says Peter. “I love meeting people, and that’s where you do it, in those towns with one bank, one factory, and one cafe.”
For Peter and Melissa, a former writer and editor for The Washington Post, whose food column, “Why Not the Best,” pioneered the genre, one of the delightful by-products of their travels have been the unlikely epicurean discoveries they have made along the way. From wild quail fajitas at a strip mall in Space City, Texas, to a delectable key lime cheesecake made by the Nuns of New Skete in Cambridge, New York, Peter and Melissa rejoice in off-the-beaten-track food finds, so much so that earlier this year, they decided to pool their writing talents and share their discoveries on randomroadfood.com.
Like a good tennis match, their restaurant reviews are written in a punchy back-and-forth conversational style. Peter sets up the jokes, and Melissa, an accomplished chef, uses her expertise to nail the food review. Seeing Melissa get back into food writing after 40 years is a source of pride and joy for Peter. “I talked my wife into leaving her job as a food columnist in 1982 to marry me, so I definitely owed her. She’s finally getting back into being a food writer, and she’s so good at it!”
Their first review of the Italian Special at the White House Home of Subs in Atlantic City, New Jersey, was posted on March 7, right as the pandemic hit and places started to shut down. “Originally, we were going to launch a 10,000-mile road trip,” says Peter. “We had pins all over a map of America, and then, of course, we couldn’t.” Instead, they have been traveling around upstate New York, focusing on no-contact cuisine and finding plenty to write about closer to home.
Peter and Melissa have developed a keen sense of when a restaurant is going to be good. Peter notes, “There’s a direct correlation between whether a place is going to be good and whether the person behind the counter seems glad you walked in, and the people working there seem happy.” Surrounded by farm stands in upstate New York, Peter and Melissa have also learned to pay close attention to how restaurants source their food. “We live in the Hudson Valley, and there are farmers markets everywhere! We can get ingredients for a great meal. Everything from the pork to the chicken wings and the vegetables came from something grown within two miles of here,” he says. In fact, one of their great disappointments is finding a restaurant where the food looks great, but the ingredients are aged and flavorless. “You can tell when the ingredients weren’t loved, and when the tomato is from a crate and the coleslaw is bland because nobody wanted it to be any better than it could be.”
However, you’ll never hear about a terrible meal in one of their reviews. If they don’t like it, Peter and Melissa don’t write about it. “Life is too short, and we’re too old to be criticizing people,” says Peter. “I used to be so opinionated, but now I just want to find nice places that will make us happy.”
Back