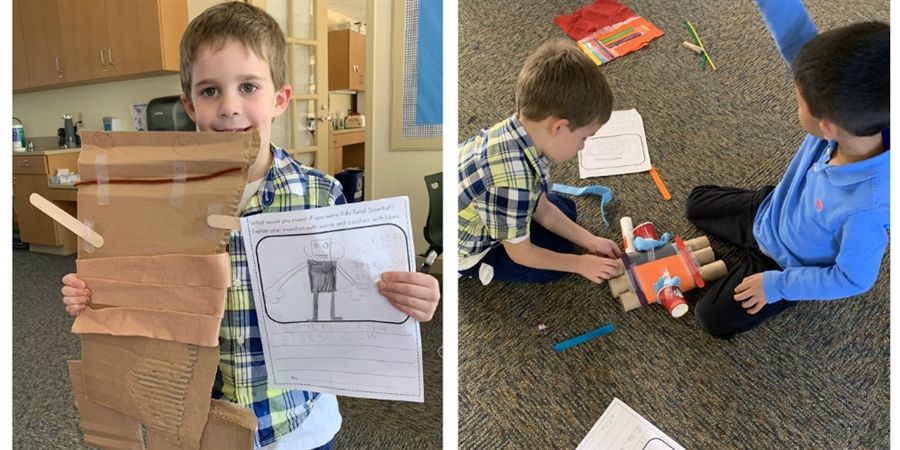 In the book Ada Twist Scientist by Andrea Beaty, Ada, a budding second-grade scientist, is constantly asking questions, exploring, and experimenting as she seeks to understand the world around her. After reading this story, Fay’s first grade students used Ada's example of curiosity and determination to design and build inventions to solve a problem or make life easier in some way.

According to first grade teacher Laura O'Donnell, the goal of this project was to get students thinking about creative problem-solving. “We talked about how scientists, like Ada, ask a lot of questions,” Laura says, “and how they often try to answer those questions by designing and making.”

Students began by brainstorming and identifying a problem that they wanted to solve. Then they designed an object to solve the problem and decided what they needed for supplies. Their inventions ranged from the somewhat familiar, a robotic cat or a jet pack, to the fantastical, like a robot that helps to clean the house or an animal cam that can spot lost pets from high in the sky. One student whose family is expecting a new baby designed “The Babyhelper 4000” to pitch in at home. Another student thought that her family needed help cooking dinner at night and invented a cooking robot with one arm to hold trays, another with an oven mitt, and the third brandishing a spatula. “The project was open-ended, so it was fun to see what the children came up with,” says Laura.

Once the students had put a well-organized plan on paper, they could start building. Using recycled materials like cardboard boxes, tubes, and cups, and craft supplies like popsicle sticks, felt, tape, and pompoms, the students built their inventions. Once complete, the students spent time testing and fixing their creations. Finally, the children presented their inventions to Laura and first grade teacher Jill Gibbons. Each student had to explain their design, describe its purpose, and reflect on the process.

With a basic understanding of the design-and-test process, students will be able to apply that same methodology to their work in a variety of subjects. In science, students are starting to learn about forces and motion, and they will be observing marbles on different surfaces the explore the forces of push and pull and the effect of friction. Then students will incorporate ramps to test and observe the effect of different degrees of incline. “The framework the students followed for their own inventions is the same,” says Laura. “We’re just moving from open-ended creativity to more specific ideas.”
Back