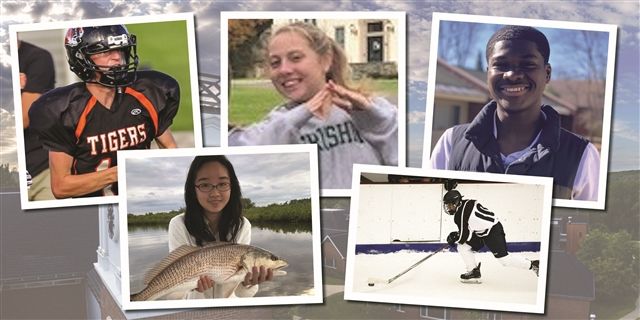 Hear from some members of the classes of 2017 and 2018 who wrote in to share highlights of high school thus far, new passions that they have discovered, and how they’ve continued to pursue the activities they enjoyed while at Fay.
Jake Desabato ’18, Suffield Academy ’21
“The highlights of my sophomore year at Suffield have been both on the field and in the classroom. During the fall season, our football team went all the way to a bowl game. During the winter, it was about growing as a basketball player and starting on the JV team. In the history classroom, some of the assignments reminded me of being in Mr. Blanchard’s class. Being a leader at Fay has helped me to become comfortable with leading at the next level, both in sports and the community when I can. I am pursuing football, basketball, and lacrosse and am very excited to get into the lacrosse season.”
Gloria Sun ’17, Phillips Exeter Academy ’20
“I have been enjoying my Exeter experience so far! I love the supportive community, the vigorous academic environment, and the variety of academic and extracurricular resources offered. I have become passionate about ornithology, and I am the founder and head of the ornithology branch of Exeter's Biology Club. I continued to pursue my interest in art by enrolling in art courses, including ART500, which is the highest art course available, this past fall term. I was also selected to be the head of the art-related service club called Art from the Heart. Perhaps what I miss most about Fay is its small and close community. I miss the family-style dinners and weekend trips to Starbucks.”
Sam Rivet ’17, New Hampton School ’21
“I’m keeping busy with varsity soccer, hockey, and lacrosse, and the spring musical. I also just got high honors for the first time. I love New Hampton; I’m going to be a proctor next year, and I recently started my college process.”
Mika Iwasa ’17, Concord Academy ’21
“At Concord Academy, I am able to come out of my comfort zone to try new things, and I definitely think Fay prepared me to take on these challenges. I loved Mr. Claire's art class when I was at Fay, and with the art techniques I developed in his class, I’ve been able to take many visual art classes at Concord Academy, ranging from graphic design to printmaking. During my time at Fay, I also made some really good friends, including Kelly Song at Phillips Andover and Richard Shum at Tabor Academy; I’m currently working with them on a student-run club called College For Cambodia, which supports college access for students in Cambodia through fundraising and other outreach programs. We have the same club in our schools, and we connect with each other frequently on the progress we made so far. It's amazing to see how our friendships have endured even though we’re all at different high schools.”
Jillian Miu ’18, Worcester Academy ’22
“I have loved participating in many different groups and teams and meeting new people with diverse interests. This winter season, I did snowboarding on Wednesdays at Ski Ward and often met up with Ms. Smith, Ms. Williams, and the Fay team! I also joined the robotics team here at Worcester Academy, and I love learning about things like Java or wiring. This fall, I was a part of the cross country team, a sport I have continued from Fay. A highlight was the big meet on November 10, where I saw a lot of my Fay friends who were also running! I miss the Fay community the most. I especially miss my advisory and my advisor, Ms. Williams, which is why it’s great to go skiing and snowboarding with her!”
Elizabeth Desimone ’17, Brooks School ’20
“I first learned to play volleyball at Fay with Mr. McCauley when I was in seventh grade. It was a sport I never thought I would play, but I ended up loving it. Brooks just added a volleyball team, and this year I was so excited to play again. Not only was I able to be a part of the inaugural team, but I was chosen captain too!”
Demitra Moutoudis ’18, Dana Hall ’21
“The highlight of the school year has been finding my academic and athletic path here at Dana Hall. I've become more focused on field hockey, and I enjoy my arts classes as well. I have found that just like Fay, Dana offers a lot of opportunities to try new things, such as music, sports, and performing arts. After being away from Fay for the first year or so, I felt like I was in a totally new environment—which I really was—but I was reminded how much Fay had prepared me for six years straight. It surprised me how prepared I was, especially in academics and athletics. I miss my friends and my teachers, but I know Fay is an experience that I will always remember.”