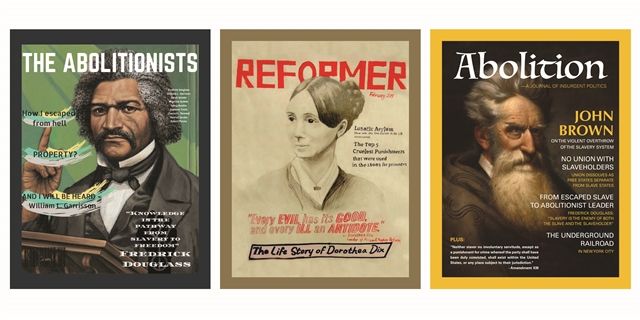 Daintry Duffy Zaterka '88
Graphic design and historical synthesis came into play this winter when Upper Schoolers designed magazine covers to highlight key historical moments of the 1800s.
Seventh and eighth graders in Fay’s English Language Program took a deep dive into American history this year with faculty member Joel Rubin, exploring a range of topics that included a close look at the reform movements that marked nineteenth-century America.
From the abolition movement to women’s rights and education reform, students examined how the changes that resulted from these movements fundamentally changed the lives of many Americans. “Some students were fascinated by the women’s movement and learning about what women in the United States had to endure,” says Joel, “and the discussions were great because the students were also making connections to their own cultures.”
For the end-of-term project, each student selected and researched one of the major reform movements and created a magazine cover and presentation that both informed about and advocated for their particular movement. The covers could be hand-drawn or created with Internet tools and had to include visuals about the problem and its solutions, the names of prominent reformers, and titles for three articles about the movement that might be contained within the magazine.
While the presentation gave students an opportunity to practice their public speaking skills and show how well they could teach their classmates about a topic, the magazine covers were an opportunity for students to use alternative methods to demonstrate their understanding. “The project sparked their creative energy,” says Joel, “and they did a fantastic job.”

Read more from ﻿Fay Magazine
Back