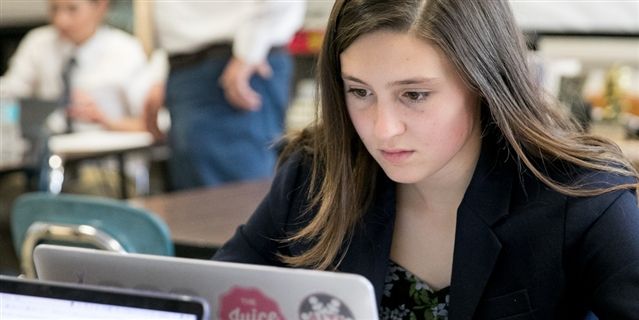 The Scull Essay: Mastering the Personal Narrative in Upper School

Daintry Duffy Zaterka '88
Since it was first presented at Prize Day in 1932, the Scull Award for Composition has celebrated student essays as a deeply personal and private form of expression.
Since it was first presented at Prize Day in 1932, the Scull Award for Composition has honored the best essay written by an eighth or ninth grade student that year. The Scull Essay, as it is more commonly known at Fay, may not have the performative flair of the Speech Competition, but while one highlights writing as a public act, the other celebrates writing as a deeply personal and private form of expression. “The personal essay encourages students to engage authentically in the world around them, nurtures an authoritative voice, and teaches students to value their own stories,” says English Department Chair Paul Abeln. It’s also a style of writing that is gaining currency, as secondary schools and colleges are trending toward incorporating more personal writing in their programs.
Upper Schoolers craft their essays over the course of three to four weeks in the spring term. Seventh and eighth graders build their essays around a central metaphor to structure their writing, but ninth graders have no limits on style or structure. “As students find their voices as writers, they are able to transcend those organizers,” says Paul. Two years ago, the Scull Essay winner wrote a series of vignettes to represent a set of experiences. “They were almost prose poetry,” notes Paul, “but they had a unified effect.”
The essays are judged by the English Department using a rubric that reflects the mastery of writing skills required at each grade level, including the use of appropriate grammar, lively vocabulary, sophisticated sentence structure, and general fluidity of writing. Each English teacher submits two or three essays from the class, the names are removed, and the department meets to rank their top selections and discuss the writing. “It’s one of my favorite meetings of the year,” notes Paul. Usually, a clear consensus develops on the winner, but often there are two or three other essays that are celebrated as “runners-up” at an Upper School Morning Meeting. “It’s a privilege to recognize those students who have written something extraordinary,” says Paul.
The Scull Essay: The Story Behind The Stories
The Scull Award for Composition was donated in honor of Guy Scull ’28 and David Scull ’30 by their mother, Mrs. Eliot Wadsworth. Guy and David’s father, Guy Hamilton Scull, was a writer and journalist who joined Teddy Roosevelt's Rough Riders and later served as a war correspondent, Deputy Police Commissioner of New York City, and a military intelligence officer in World War I. Writing and storytelling were an important part of the Scull family, and Scull’s biographer Henry Jay Case noted that for Scull, literary expression was “almost a passion. He always wanted to write, more than he ever wanted to do anything else.”
Excerpts from this year’s Scull Essay winners
Winning Essay: “A Rocking Chair” by Frank Zhou ’19
Dad’s favorite rocking chair appeared even more antique under North Carolina’s bright, early-autumn sun. My tired eyes traced the faded patterns of its corduroy cushions, along its worn seatback and creaky wooden frame, all the way down to the gentle indentations in the carpet where rockers met ground. To the unknowing eye, the chair was just another part of an average suburban abode. Two floors. Nice lawn. Everything a kid and his dad could wish for. But everything was so... deathly silent. Forget a pin—I could hear a feather drop.
Runner Up: “Ensnared by Memories” by Orville Amankwah ’19
I hear the high shriek of “Tag!” across the playground and immediately join in the chaos taking place among the otherwise calm games, like hopscotch and hula hooping. For me, there is only one purpose; to not become “it” for as long as possible. My rainbow light-up Skechers bouncing off the black cement. Giggles echoing past the fence and into the schoolyard. In my mind, this is where innocence lies, hidden deep in the inner workings of my brain. My brain works on overdrive now to make sure I never feel the naive oblivion that is childhood. It protects me against the fallacy of never losing something you cannot get back. My innocence lies in between the jazz notes my father carried me to bed with, and the double-dutch line out on that black-tarred playground.
Runner Up: “Recipes of Yesterday” by Priscilla Chan ’20
Even now, when I visit my grandma, holding her hands, looking into her eyes, I can still smell that rich soup, the moments of those Sunday mornings ingrained in my brain. I recall holding her hands as a child, how delicate and soft they seemed, and yet that never made them any less sturdy. Her hands told stories of different times and hardships, having grown up seemingly worlds away from me, in a different time, in an era and a life that I would never know. I read these stories in her hands because she never told them out loud; her stories were told in the way she took the time to cook carefully and savor her food, as it had been scarce when she grew up. Her stories were told in the way she would sit by the window in the afternoon, resting. My grandmother had worked her entire life without fail, since she was brought up to understand the importance of hard work and the necessity of saving from a young age.

Find out how our Upper School writers developed their skills! Read about our writing programs in Primary School and Lower School.