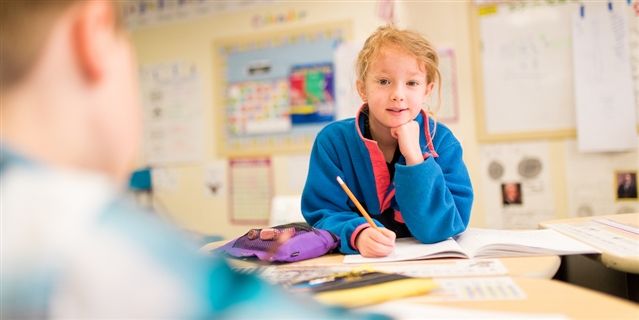 Daintry Duffy Zaterka '88
During the year, second graders build writing skills sequentially through a variety of projects that prepare them for the road ahead.
If you don’t know how to kick a soccer ball, make a waffle, or do a French braid, just ask a Fay second grader. This year, second grade writers created “how-to” books, breaking down everyday tasks into just four easy-to-follow steps. Along the way, students were practicing their informative writing skills and exploring how transition words can turn a list of instructions into fluid descriptive prose.
Most second graders enter Kath Walton’s classroom able to write simple sentences. Her goal is for students to leave Primary School with stamina for writing and a toolbox of writing skills. During the year, students build those skills sequentially through projects that prepare them for the road ahead.
“First, you put on your cat brushing glove.”
The how-to books provided a real-world opportunity for second graders to hone their summarizing skills. After brainstorming lists of things that they knew how to do, students chose an activity that could be broken down in four simple steps, winnowing broader topics like “how to play soccer” down to specific actions like “how to kick a soccer ball.” Using the transition words “First,” “Next,” “Then,” and “Last,” students wrote and illustrated four-page flip books, with one step per page. Students wrote books on simple topics like how to put on snow pants, as well as activities one might not have previously considered, such as “How to Brush a Cat.” (Hint: the second step, finding the cat, might take a while.)
“Cluck! Cluck!” Whose chickens are those?
Writing a great hook to grab the reader’s attention is a nuanced skill that can flummox even the most seasoned writer. Second graders practiced their hook writing when they wrote biographies of their classmates. Students paired up to interview each other, learning factual information as well as details about favorite books and hobbies.
Once the interviews were done, the challenge was to synthesize the facts into an interesting story. “We talked about different ways to question,” says Kath. Some students chose to grab their reader’s attention with descriptive flair: “One night on April 23, 2011, a beautiful girl named Phoebe was born.” Meanwhile, others dove right into the action: “Cluck! Cluck! Whose chickens are those? Meet Amaia, and she LOVES chickens!”
“A Rock is ancient
As old as time
As wise as
Owls in the night”
In April, second graders celebrated National Poetry Month by working in small groups to write free-verse poetry about everyday objects. “We talked about looking at objects as scientists and then looking at them with a poet’s eye,” Kath explains. While free verse is one of the simplest forms of poetry, it can be challenging for elementary students who tend to think that descriptive language requires a lot of words. After brainstorming rich descriptive ideas, Kath helped students pare down to essential words and images to create their poems about objects as mundane as a lemon (“It’s as yellow as cheese/Or a balloon floating in the sky”) or a pinecone (“A hedgehog/Brown, prickly/Named Harold”).
“I think that the American Elm should be the state tree because George Washington took command of an army beneath the elm tree.”
In the winter, second graders focused on persuasive writing, learning strategies to convince a reader of a particular point of view. With a snowstorm predicted, students wrote essays arguing both for and against a snow day (the pro-snow day contingent won). Later, students connected their writing to their yearlong study of Massachusetts, writing paragraphs to argue for the adoption of a particular bird, tree, or gem as a state symbol.
Students used graphic organizers to craft compelling arguments, starting with a “big and bold” opinion and adding reasons and supporting details. While the arguments ranged from factual (“The cod should be our state fish because the Pilgrims and Native Americans used the fish for food and fertilizer”) to flavorful (“Boston Cream should be our state doughnut because it is delicious, has chocolate icing, and has ‘Boston’ in the name!”), all of the students began to see the power of language to change people’s perspectives.
The beauty of the writing program in Primary School, notes Kath, is that writing is not just limited to language arts time. The students write consistently across the curriculum, documenting their problem solving in math, recording observations and inferences in science, and reflecting on ideas in social studies. Regardless of the purpose, these young writers are learning to incorporate the elements of good writing: bold beginnings, descriptive vocabulary, and language that is clear and persuasive.

Find out what happens next! Read about our writing program in the Lower School and Upper School.