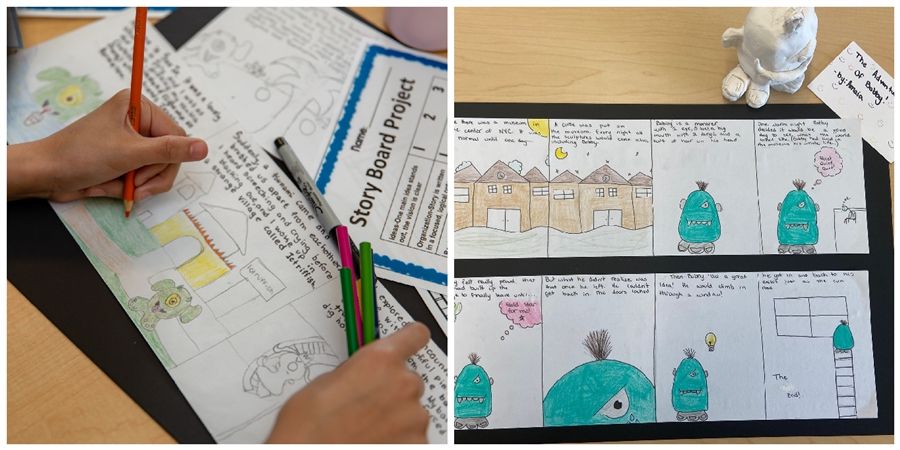 Students crowdsourced clay creatures in Mary Munkenbeck’s fifth grade writing class to inspire a storyboard writing project. Each student started with a lump of clay and rotated around the room, adding a single detail to each creature, like one giant eye or a pointy horn. When students returned to their desks, they had to write a story about the original creature they found there. “Each creature is a community creation because everyone added something to it,” says Mary. Students placed their creatures on the desk in front of them as their monster muse and used their unique features to inspire their stories.

As the fifth graders wrote, they focused on developing the character and setting and storytelling skills like incorporating a rising action that falls to the resolution. They had to design their story to be laid out in logical order on the storyboard, and students had to think about their story mathematically as they planned out how it would fit in the allotted storyboard panes. Once they organized the story, they transferred it to a large sheet of paper and created colorful artwork to illustrate each scene. The final product was mounted on a black storyboard. Tales included “Stella and The New Shoes Dilemma,” about a monster who has trouble finding shoes to fit their one giant foot, and “The Adventures of Bobby,” about a one-eyed, three-toed, two-fanged monster who escapes from the museum where he lives.
Back
ABOUT
FAST FACTS
MISSION & PHILOSOPHY
FACULTY & STAFF
CONTACT
WORKING AT FAY
CALENDAR
BLOG
PRIVACY POLICY
ADMISSION
ADMISSION EVENTS
APPLY
AFFORDING FAY
VISITING CAMPUS
PROGRAM
ACADEMICS
ATHLETICS
ARTS
BOARDING
ENGLISH LANGUAGE PROGRAM
SECONDARY SCHOOL COUNSELING
DIVERSITY, EQUITY, AND INCLUSION
DISTINCTIONS
CREATIVITY AND DESIGN PROGRAM
PUBLIC SPEAKING
CHARACTER MATTERS
CIRCLES OF CONNECTION
GLOBAL COMMUNITY
LEADERSHIP
NINTH GRADE PROGRAM
DEDICATED SERVICE
48 MAIN STREET
SOUTHBOROUGH, MA 01772
main number 508-490-8250
admission 508-490-8201