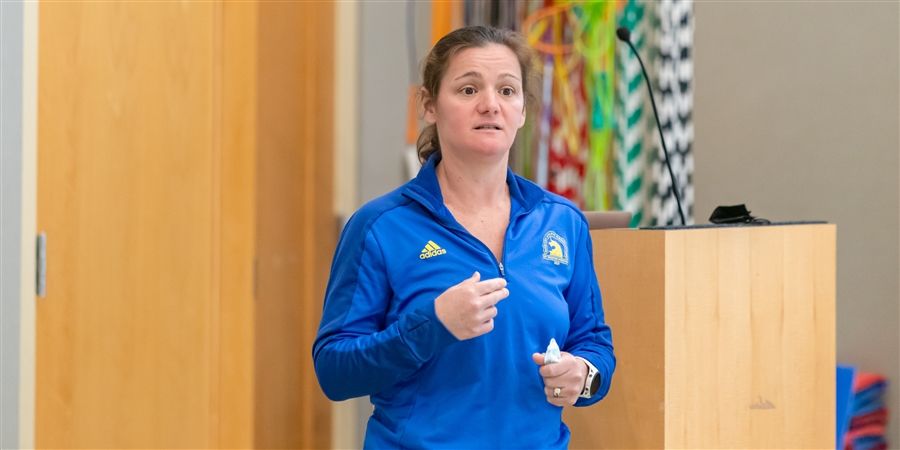 On Tuesday, May 3, Primary School students welcomed a special guest, marathoner Becca Pizzi who lives in Belmont, Massachusetts. Becca was the first American woman to complete the World Marathon Challenge, a series of seven marathons on seven continents in seven consecutive days! Becca is also the author of a children’s book, Becca’s Feat on Feet!

Becca started running when she was six years old - the same age as many of our Primary School students! She has run 18 Boston Marathons in a row and two World Marathon Challenges. Becca explained the incredible logistics of competing in the World Marathon Challenge starting in Antarctica, where she arrived three days early to acclimate to the frigid -10 degree temperatures. After running a marathon on a glacier in Antarctica, Becca traveled to Cape Town, South Africa, where it was 91 degrees and 90% humidity! Sleeping on the plane between continents and marathons, Becca was only on each continent for 12 hours running in Perth, Australia; Dubai; Lisbon, Spain; Columbia; and finishing in Miami, Florida. Becca shared the importance of staying positive through injuries and unexpected delays.

The event finished with student questions. Primary Schoolers asked what kinds of food Becca ate during the challenge and were excited to learn that she brought one of their favorite foods to remind her of home - Swedish fish! They also asked her how many states she has run in, and Becca shared that running in all 50 states is her next goal.

To prepare for Becca's visit, first and second grade students, who have been learning about Massachusetts in social studies, got a chance to run their own marathon in PE class. PE Teacher Jack Wong set up a marathon course on MacAusland Field that started the students in  "Hopkinton". They passed through all of the towns that are on the Boston Marathon route, and even had their own version of "Heartbreak Hill." Their run concluded after they passed the Citgo sign and made it into Boston!
Back
ABOUT
FAST FACTS
MISSION & PHILOSOPHY
FACULTY & STAFF
CONTACT
WORKING AT FAY
CALENDAR
BLOG
PRIVACY POLICY
ADMISSION
ADMISSION EVENTS
APPLY
AFFORDING FAY
VISITING CAMPUS
PROGRAM
ACADEMICS
ATHLETICS
ARTS
BOARDING
ENGLISH LANGUAGE PROGRAM
SECONDARY SCHOOL COUNSELING
DIVERSITY, EQUITY, AND INCLUSION
DISTINCTIONS
CREATIVITY AND DESIGN PROGRAM
PUBLIC SPEAKING
CHARACTER MATTERS
CIRCLES OF CONNECTION
GLOBAL COMMUNITY
LEADERSHIP
NINTH GRADE PROGRAM
DEDICATED SERVICE
48 MAIN STREET
SOUTHBOROUGH, MA 01772
main number 508-490-8250
admission 508-490-8201