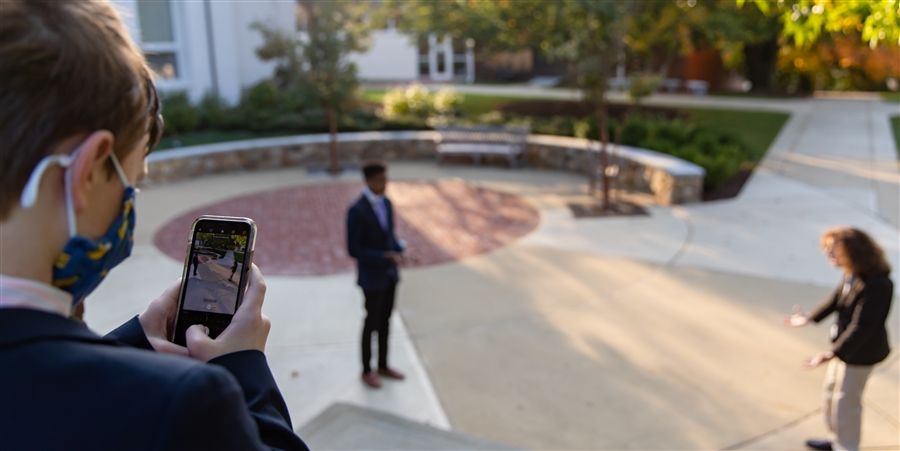 Storyboarding Scenes from "A Raisin in The Sun"

Ninth graders in English Department Chair Gwen Couch’s classes have been reading, A Raisin in the Sun by Lorraine Hansberry and exploring the theme of power and how it intersects with race, gender, education, wealth, poverty, and success throughout the play. For their final project, students collaborated in small groups to create a storyboard of still photos from one or two scenes in the play. They used iMovie to connect the stills that dramatize the scene and then contextualized them with voiceovers, sound effects, and music to support the action and emotion.
Since they would be assuming the varied mantles of actors, directors, photographers, and sound editors, students had to analyze their scenes from the outside, identifying the power dynamics at play, and then step inside the action to convey it to the audience visually. “Sometimes literary analysis is difficult,” notes Gwen, “and taking photos allows the students to analyze the power dynamics and determine what makes a character powerful in a particular moment in time. They must justify each photo included in their storyboards, so the project incorporates visual analysis as well as written analysis.”
Gwen grounded the reading and analysis of the play by looking at the practice of redlining after World War II, where maps were marked by race to discourage lenders from issuing loans in black communities. The action of the play revolves around the members of the Younger family, a black family living in poverty in Chicago. After the patriarch’s death, the family receives a life insurance check and battles over how to spend the money. The character of Mama puts the money down on a home in an all-white neighborhood whose residents do not want them to move in. “We had a lot of discussion around the idea of ‘The American Dream’ and whose dream it is; there are contemporary connections to what’s happening in the world,” says Gwen.
To photograph their scenes, students set up shots on the steps outside the dining hall - where the elevation underscored the power differential between characters - and in the student lounge to double as the Younger family’s living room. Once they had the images they wanted to use, they used them to create a movie complete with a music score and a dramatic reading of the lines to accompany each image. “They had to be highly selective about which lines would make the greatest impact, and they had to choose music that would underscore the action without overwhelming the scene,” says Gwen. Each project had to include a minimum of fifteen photos. The students worked together to stage and photograph the scenes and create voiceovers, music, and sound effects. Students also had to include a “fully-developed” paragraph with each photo that explained the purpose of the shot, its intended effect, and how the staging and other techniques used in the image identify aspects of power in the scene.
The themes of justice, power, and revenge will continue in the ninth grade English curriculum as Gwen’s students move on to reading Ethan Frome next and then Frankenstein later in the year. “As we did in A Raisin in the Sun, we’ll continue to explore the concept of otherness, which characters have decision-making power, and the impact of those decisions on subordinate characters.”
Back