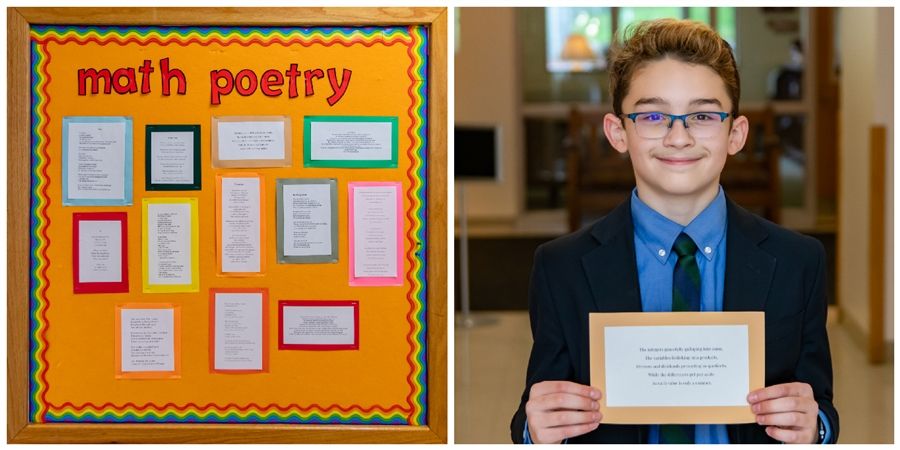 Math and Poetry in Pre-Algebra

Students in Pre-Algebra Advanced have been exploring the connections between two of humanity’s most ancient means of expression: mathematics and poetry.

Recently, students in Math Department Chair Cassandra Papalilo’s class spent a class learning about the links between math and poetry and crafting poems about math. Students were given their choice of poetic styles. They could write limericks, sonnets, haiku, acrostic, square stanzas (where the number of syllables per line equals the number of lines), or poems based on the Fibonacci sequence (the number of syllables per line is based on the sequence.) English Department Chair Gwen Couch joined one of the classes to help students work on their ideas and explore some poetic possibilities. Cassandra’s only parameters for the project were that each poem had to incorporate ten math vocabulary words or phrases, be based around a theme, and, most importantly, be creative!

The cross-curricular nature of this project helps students make connections to their strengths and skills in other coursework. Students can see math from a different perspective, and Cassandra gets to see a different side of her students as well. “A few wrote about their feelings about math, while others wrote about who they are and where they see math in the world, from a snowflake to a beach,” says Cassandra. “What I like so much about this project is that it showcases the students and their creativity in a different light.”

A function, where every domain is distinct
Like me, diverse from all alive and extinct

Absolute value, when all is positive and glee
To be honest, that isn't always like me

Statement and reason, always proving our thoughts
So tedious and insipid, it makes me distraught

Linear equations, some simple some not
Like me involute, but also a dot

Alpha, beta, gamma, letters in greek
I learned that one day, in a past week

Pemdas, the government for all math
Like ours, it shows order, but with significantly less wrath
Back