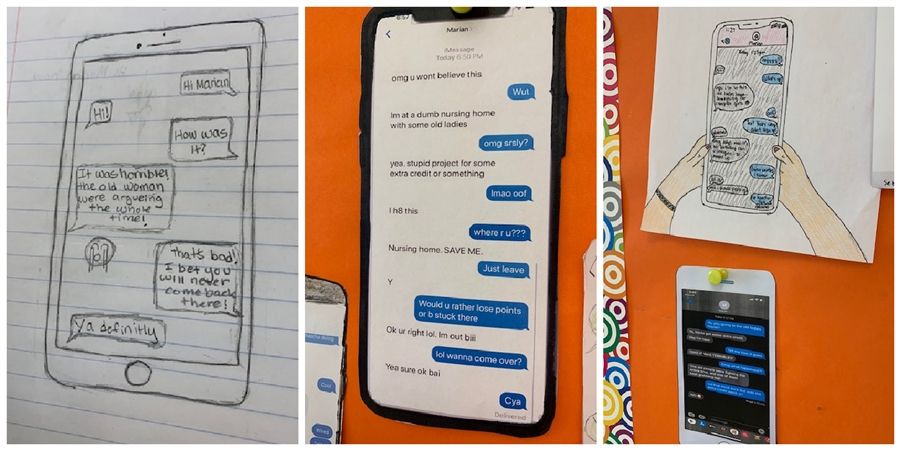 Illuminating a Character with a Screenshot

Students in Dan Roy's seventh grade English class recently read Eudora Welty's short story, "A Visit of Charity," exploring its characters, moments of conflict, and themes. In the story, originally published in 1941, Campfire Girl Marian visits a local nursing home hoping to earn some easy community service points towards a badge. Instead, she is drawn into the dark relationship between two embittered older women who spend their days sniping at one another in their dank room at the nursing home.

After writing about the story's four main characters in class, Dan challenged his students to pull fourteen-year-old Marian into the present day by assigning a cell phone screenshot project focused on her character. Each student had to imagine that they are Marian's best friend and are texting with her while she is at the Old Ladies' Home. Then they had to draw an image of the phone screen displaying that conversation.

"A Visit of Charity" is told in the third person, so this project encouraged students to explore what Marian is thinking and feeling during the story, using the screenshot of this fictional conversation as the medium to express her misery. "I've taught this story for twelve years," notes Dan, "and I've never done this before." However, he was inspired by colleagues in the English department who are also looking for innovative ways to approach stories this year.

While this project allows students to creatively demonstrate their understanding of the story and show off their mastery of emojis and textspeak, Dan underscored with his class that the real work is in diving back into Welty's text to find the details and moments that illuminate Marian's character. The final projects - and those critical reading and thinking skills - are on display along the back wall of Dan's classroom.
Back