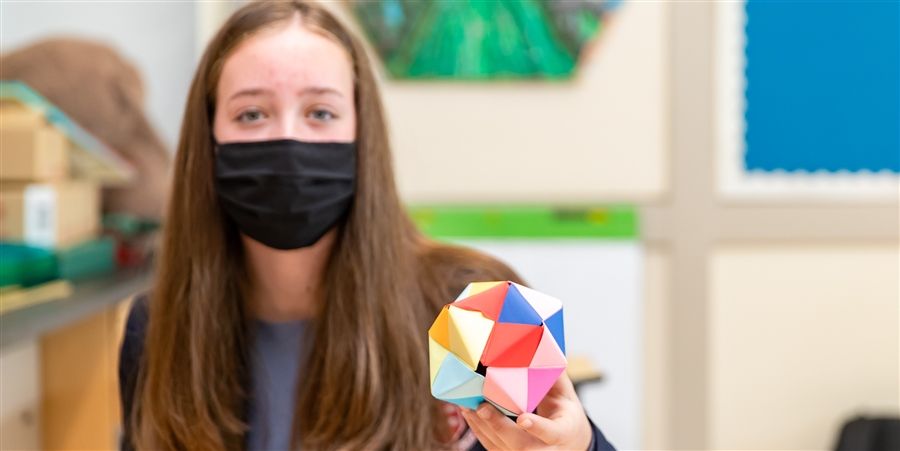 Like runners stretching before a race, Upper School students in Joe Buteau's Geometry class spent the first few classes of the fall term warming up their math muscles by creating modular origami.

Modular origami combines multiple units, each folded from a single piece of paper, to create larger and more complicated forms. Joe's students began by learning how to make the Sonobe units that form the building blocks for each model. Each Sonobe unit is created by folding a square piece of colored paper multiple times until it forms a parallelogram with two triangular tabs at either end and two corresponding pockets within the center square. The Sonobe units can be connected to form larger shapes. For example, a simple cube combines six Sonobe units, while an octahedron requires twelve Sonobe units.

Students worked in class to complete a cube and an octahedron. They presented their work by taking pictures of their finished products and creating a Powerpoint presentation, including a page for each origami creation. As an additional challenge, students could also attempt an Icosahedron, a polyhedron with twenty faces that requires 30 Sonobe units to build, or they could create a completely original polyhedron with any number of units.

While the project introduced geometric concepts like pyramids, triangles, and vertices back into students' working mathematical vocabulary, the project's main goal was far more straightforward - kick off the year by having fun with some hands-on math!
Back