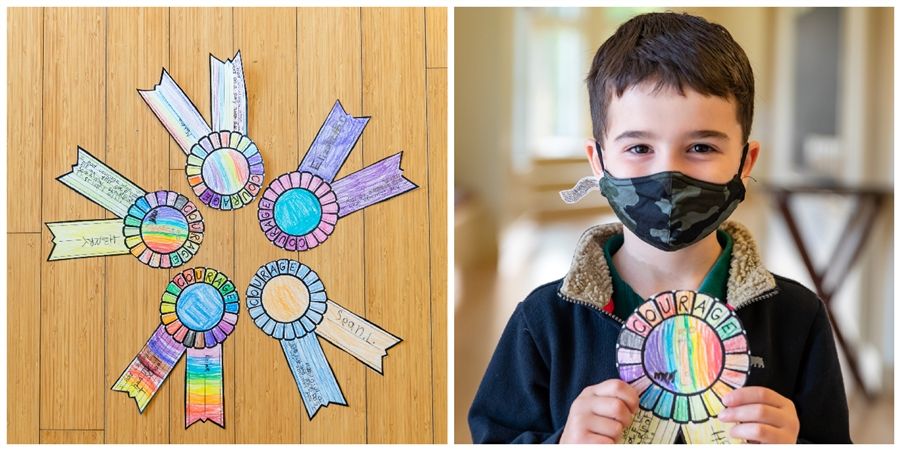 My Badge of Courage

What does courage mean to a second grader? Perhaps a firefighter running into a burning building or a mountain climber tackling a lofty peak might be the first thing that comes to their mind. But Head of Primary School Katie Knuppel introduced this year’s school theme of moral courage by helping students recognize that courage comes in all shapes and sizes.
In the first Primary School meeting of the year, Katie read Courage by Bernard Waber. Courage celebrates everyday examples of courage from riding the big roller coaster to being the first to apologize after an argument. After discussing the story, Katie invited students to share their own examples of times when they were courageous with the Primary School community. When they got back to class, each second grade student decorated their own badge of courage and wrote about a time that they demonstrated courage on one of the ribbons.
On Monday, the day of the virtual Boston Marathon, second grade students dug deeper into the topic by reading Her Fearless Run by Kim Chaffee, the story of how Kathrine Switzer became the first woman to run the Boston Marathon with an official race number. Second grade teachers Katie Farrar and Kath Walton talked about how Kathrine Switzer made the courageous choice to register for the race using just her initials and refused to be pulled off the course when a judge tried to stop her from running. The class also read Spaghetti in a Hotdog Bun by Maria Dismody, a book that celebrates differences and shows that being proud of who you are takes a lot of courage too.
Second graders used the letters of their first names to write an acrostic poem about courage. Each letter expressed a different way in which they have demonstrated courage. Some students wrote about sports and the courage that it takes to step on a field if you’ve never played before. With five new students in the class, the courage that it takes to start at a new school was also a recurring theme.
The theme of moral courage will continue to be woven throughout the year, but Katie Farrar points out that recognizing those small moments when students make a courageous moral decision will be an important goal. “Kids don’t always recognize it at the moment, but they make these decisions all the time,” she says. “Inviting someone to play with you on the playground, because it’s the right thing to do, is moral courage.”
Back