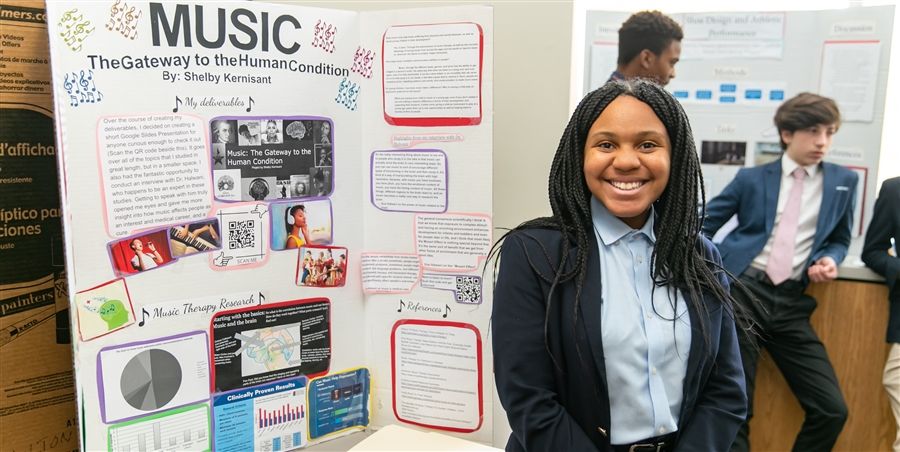 When ninth-grade biology students were prompted to contemplate and share some of the big questions that they wonder about during the first week of school, they didn't know that they would spend their entire winter term delving into some of those fields of curiosity. Under the guidance of the ninth grade Biology teachers, Chris O'Connor and Science Department Chair Gus Halwani, students designed their own course of study for the term. They planned, iterated, and executed their project while learning valuable research and project management skills along the way.

Each student or group of students started by writing a project proposal going through several drafts to ensure that they had identified a fully-formed project as opposed to just a thin idea. Once students had developed their proposal, they fleshed it out into a complete project prospectus with a timeline and deliverables that they would be responsible for along the way. Using Gus and Chris as mentors, students brought the Fay Design Process to bear on their project as they followed a framework that required them to evaluate and refine their work continually. Every two weeks, students had deliverables to kept their project on track, including written tasks like outlines and reflections and presentation updates to the class where they discussed progress and problems they were encountering. "They get feedback from their peers, and they also get questions," says Gus. "The culture in the classroom is not like the fall or spring term where everyone on the same railroad track. With this project, it's more like we have a compass that everyone shares, but people can explore different parts of the map."

Early in the process, students created 18x24 inch color slides advertising their project to the community, which lined the walls of the science hallway like coming attractions. The sheets included their topic, the members of the groups, and some information about the project. Each project was unique. While all required some research to familiarize students with the work that had already been done, some went on to conduct an experiment, interview experts for insight, or create a model of some sort.

One student was interested in conformity, and after learning about some of the famous studies that have been done in the field, she designed and conducted a study within the Fay community. Another group of students wondered if high priced sneakers are worth the money. Using the Fay gym, they set up a series of agility tasks and tested a regular sports sneaker against specialized running and basketball sneakers to see which performed better. Intrigued by the Mozart effect, another girl created an experiment to see if student performance on a math test is better when listening to pop music or classical music. Parents may be dismayed to discover that pop music listeners were more successful!

The final deliverable for the project was to present it at the Science Symposium on March 4. Each student created a poster to display their project and its findings and brought copies of their research paper and materials to share with attendees. Throughout the morning, Upper School students, faculty, and staff visited the symposium to learn about the students' research and celebrate their hard work. "The students have been how living this material for a while now, so the symposium is not like a recital," says Gus. "They are so comfortable with the work, and they're walking people through it and taking questions. That's where the ownership for this learning comes through."
Back