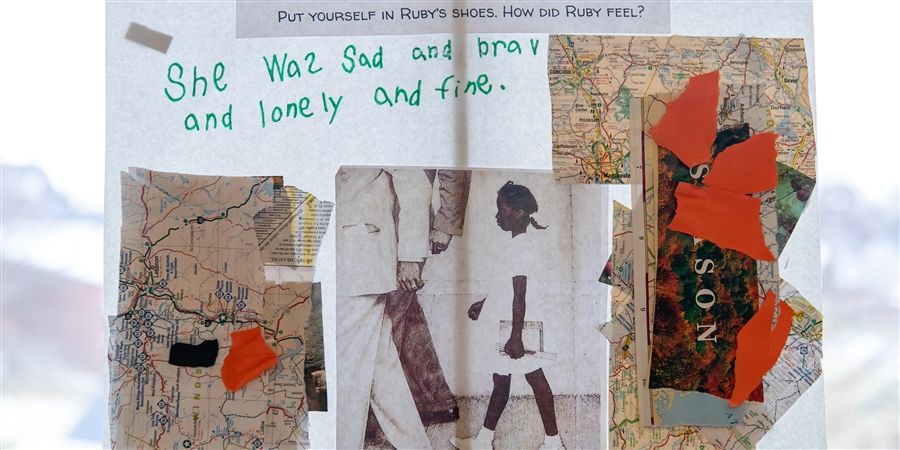 As first graders focus on Black History Month in social studies, they are also making strong connections to the winter term theme of empathy.

Learning about Ruby Bridges, the first African-American child to desegregate her all-white school in Louisiana in 1960, was especially powerful for Fay’s first graders. Particularly because, like them, Ruby was just six years old. First-grade teachers Laura O’Donnell and Jill Gibbons read The Story of Ruby Bridges by Robert Coles to the class as well as some nonfiction books that included real pictures of Ruby walking through angry crowds flanked by federal marshalls. They also watched a video about empathy, where other students shared their ideas about what it means and examples of empathy in action. As a class, they discussed the events around Ruby starting school, how she remained stoic and refused to cry, the loneliness of being the only child in her classroom, and all the different emotions that Ruby must have experienced. “They were so passionate about it,” says Jill. “We have such a diverse group of students in our class that it made no sense to them that grownups would act this way.”

The Fay first graders came up with a list of emotions that the crowds of jeering people would have elicited in Ruby as well as other powerful feelings that reflected her determination to act unfazed by the protesters and to get a good education in spite of it all. Some examples were scared, worried, brave, lonely, and sad. “The words kept pouring out,” says Jill. As each student added a word to the list, they had to explain to the class why Ruby would have felt this emotion. Finally, each student took a piece of paper with the famous Norman Rockwell painting The Problem We All Live With that depicts Ruby in the center, and they wrote words around it answering the prompt, “Put yourself in Ruby’s shoes. How did Ruby feel?” adding drawings and collages that they felt represented the words.

Earlier in the month, students also used empathy in their study of Dr. Martin Luther King. They studied his famous “I Have a Dream” speech, exploring how he worked hard to help others and his desire to make the world a better place. Jill and Laura challenged students to articulate their own dreams for others in writing and pictures. From ending global warming to wishing for peace around the world, students expressed their ideas and drew pictures that reflected their dreams. Later this month, first graders will learn about Rosa Parks and the Montgomery bus boycott. They will be connecting to Rosa’s bravery as they discuss Rosa's actions and connect them to a time in their lives when they had to be brave.
Back