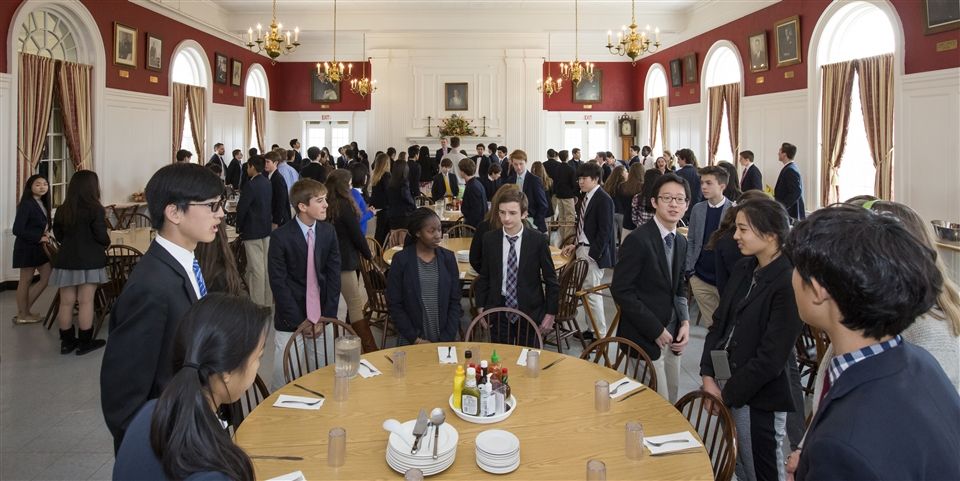 Our Favorite Foods, Then and Now

by Daintry Duffy Zaterka '88
No matter the decade, food has always been a hot topic of discussion at Fay—and whether you’re a member of the Class of 1957, 1987, or 2017, it’s safe to assume that you have strong opinions about your meals in the Dining Room!
This spring, we embarked on an in-depth survey of our current students to learn more about their opinions about the food at Fay and to identify areas of improvement. Students in grades three through nine submitted their feedback on Fay’s overall food quality, identified their favorite and least favorite meals, and suggested changes.
The survey got us thinking about what our alumni remember about their dining experiences at Fay—so we followed up with a completely unscientific survey on our Alumni Facebook page to see which dishes alumni remember most fondly. Their recollections were vivid and (occasionally) mouthwatering!
FAY FOOD: THEN
Favorite Fay Lunches of the Past
Honorable Mention: Homemade Chocolate Chip Cookies
Alumni Remember: What were your favorite dishes at Fay?
“American Chop Suey with toast points. I believe there is a photo of me in the yearbook stuffing my face with that dish.” —Tom Higgins ’87
“Anything Lew Maida cooked, but especially Bubblegum Stew and American Chop Suey. I remember distinctly sitting at the head table with Betty Scattergood, the ringing of the chimes, sitting ramrod straight in our chairs, and being taught the proper way to eat soup with a spoon—at right angles to the body and bowl! I hear her voice in my head every time I eat soup to this day!” —Kristen Atenasio Melnick ’88
“Hermits! I used to wrap extra in paper napkins and slip them into my blazer pocket for later.” —Rachel Levin ’89
“Not necessarily the food but the experience... like sitting at Dick Upjohn's table and getting the ‘No Thank You’ helping." —Lochlain Lewis ’78
Recipe: Lew Maida’s Bubblegum Stew (as interpreted by Jill McElderry Maxwell ’85)
Bubble Gum Stew - it's an evocative name for many Fay graduates. Whether you loved it or hated it, we all remember the name. I'm more than 30 years out from Fay, and I've been making variations on this cheesy, gooey creation for many of them, especially once my son came along. I can't remember exactly how Lew Maida made it, but here are some suggestions if you'd like to try making your own variation.
FAY FOOD: NOW
Current Favorite Fay Lunches
Fay’s dining menu has evolved significantly over the years. Shepherd’s Pie and Dagwood Sandwiches have given way to tacos, chicken tenders, a salad bar, and daily soup options. Chef Wayne Scire and his staff continue to enhance the menu in response to our students’ changing tastes and preferences.
The results from this year’s survey indicate that Fay students’ current favorite meal by a landslide is General Tso’s Chicken, a lightly battered fried chicken in a sweet and tangy sauce served with steamed broccoli and white rice. Other favorites include grilled cheese, chicken tenders, pizza and Swedish meatballs. The salad bar also received high marks. Predictably, fish entrees were students’ least favorite, with fish sticks and baked fish both earning the proverbial fisheye.
Based on the survey, Fay’s Dining Services came up with a list of menu enhancements that the staff began rolling out this spring. The salad bar now features broader options for vegetarians or those who would like an alternative to the entree. Additions include a lean protein option like shredded or chopped chicken, hard-boiled eggs and hummus, more chopped fresh fruit, and limited selections of deli meat and cheese so students can make their own sandwiches. Fridays will be a  “student choice” day, where students will vote for Friday’s meal at lunch on Monday. This fall, there will also be several enhancements for our boarders, including an omelet station on the weekends and weekly themed dinners to celebrate events like St. Patrick’s Day and Red Sox Opening Day.
Overseeing these enhancements is Chef Wayne Scire, who arrived at Fay this year with over 30 years as a professional chef in noted restaurants and resorts around the world. He began working in restaurants at 13, starting as a dishwasher and salad artist. He built his reputation as a Sous Chef at French Hotel Bora Bora Le Meridien, and he received the rank of Chef de Cuisine Le Meridien Coronado California in 1996. He has served at establishments including Morton’s of Chicago Steakhouse, Fleming’s Prime Steakhouse and Wine Bar, Le Meridien Hotel in Coronado, California, and Crown Plaza Boston. He has appeared on Good Morning San Diego NBC and Sacramento’s Fox40 as a guest chef.
Now, he brings the same energy and enthusiasm honed at top dining establishments to Fay’s Dining Services, where he is working hard to make food aficionados out of some of the toughest critics around: middle schoolers!
Back
ABOUT
FAST FACTS
MISSION & PHILOSOPHY
FACULTY & STAFF
CONTACT
WORKING AT FAY
CALENDAR
BLOG
PRIVACY POLICY
ADMISSION
ADMISSION EVENTS
APPLY
AFFORDING FAY
VISITING CAMPUS
PROGRAM
ACADEMICS
ATHLETICS
ARTS
BOARDING
ENGLISH LANGUAGE PROGRAM
SECONDARY SCHOOL COUNSELING
DIVERSITY, EQUITY, AND INCLUSION
DISTINCTIONS
CREATIVITY AND DESIGN PROGRAM
PUBLIC SPEAKING
CHARACTER MATTERS
CIRCLES OF CONNECTION
GLOBAL COMMUNITY
LEADERSHIP
NINTH GRADE PROGRAM
DEDICATED SERVICE
48 MAIN STREET
SOUTHBOROUGH, MA 01772
main number 508-490-8250
admission 508-490-8201