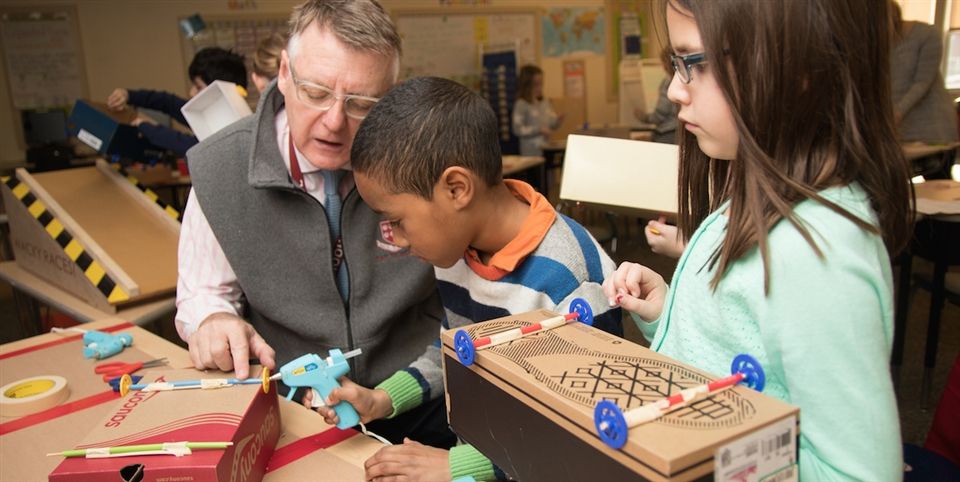 Learning Outside the Box: Innovation Across the Curriculum

by Daintry Duffy Zaterka '88
What do Mexican sugar skulls, shoebox racecars, hand-painted clocks, and the windows of Notre Dame have in common? They were all subjects for design projects this year as design thinking pushed its way out of the Innovation Lab and into the curriculum across the divisions.
Design/build projects at Fay are about much more than breaking up the regular routine with hands-on fun. The process of designing, building, and creating engages students with the material at a deeper level, challenging them to think and prob- lem-solve in ways that will help them become more effective and resilient as learners. “It’s not about making stuff; they’re not all going to become engineers,” notes Head of School Rob Gustavson. “Rather, students participate in these projects to learn habits of mind, envisioning something they want to create and applying problem-solving skills as they figure out how to make that vision a reality.”

Curricular design projects provide an ideal context for developing many of the skills that are increasingly acknowledged to be essential for success in today’s world. “We want our students to be curious, creative, and imaginative,” says Director of Innovation David Dixon. “We also want them to be persistent and develop grit as they work through challenges. It’s important that our students not see failure as an ending, but as a starting point.”
Primary School: No Fear of Failure
What makes Primary School students the ideal target audience for the Innovation Lab? They’re itching to try new things and fearless of failure. “I get 40 questions for every two students,” says Design, Technology, and Innovation teacher Allison Bishop: “‘What’s that?’ ‘How does it work?’ ‘Can I do that?’ ‘How do I do that?’”
Allison and David brought several design/build projects to the Primary School this year that connected to the students’ science, math, and language arts studies while also reinforcing creative problem-solving skills.
The second graders participated in a Wacky Car Race Challenge, for example, where students turned a shoebox into a racecar using string, masking tape, plastic cups, wheels, straws, wooden skewers, and weights. The challenge was to use a pulley to move the car up a hill and stop at the top before plummeting off the cliff on the other side.

There were numerous kinks that could hinder a car’s success. If the axle was too narrow, the wheels would rub against the sides of the car, causing friction and slowing the vehicle. If the pulley string was too short, the car wouldn’t make it to the starting line. If a student put too much weight in the plastic cup, the car would be pulled over the cliff. As the students designed, tested, and refined their cars, they experienced the scientific principles of force, friction, and momentum first-hand. “The children were so intense and engaged,” recalls David. “There was a sense of great satisfaction when their cars worked because they had persevered through the challenges.”
Later in the year, world languages teacher Erin Overstreet worked with Allison on a project to complement the second graders’ Spanish studies. Students learned about the Moorish architecture of the Alhambra in Granada, Spain, focusing on the symmetrical geometric designs of the palace’s thousands of tiles. Using a computer program called 2D Design, the second graders learned how to draw triangles, rectangles, circles, and squares, and they created their own tiles that were produced using the laser cutter in the Innovation Lab. The final product is a 6x6-foot tile mosaic hanging by the main stairs in the Primary School building featuring a tile contributed by each second grader. “Through this project,” says Erin, “the students engaged with the original art in a more thoughtful way and made meaningful connections.”
Lower School: Making it Personal
By Lower School, students are using design as a way to differentiate their work and make it unique to them. When third graders enriched their study of analog time-telling by building their own functional clocks, the components of each clock were exactly the same, but the results were entirely distinct. Students could change the shape of the numbers, choose different types of tick marks to go around the edge, and even change the shape of the clock face itself. Each clock face was produced with the Innovation Lab’s laser cutter and hand-painted in the art room, and, Allison notes, “You can see the kids’ ideas and personalities shining through.”


As part of their reading of the 1961 classic, The Phantom Tollbooth, sixth graders used the Innovation Lab’s green screen to literally create their own adventures within the book. Sixth grade reading and writing teacher Lara Gleason challenged each student to write a new adventure for Milo, the book’s protagonist, who encounters unusual characters in a world full of idioms, puns, and wordplay. Each student’s story was written in the style of the author, Norman Juster, and accompanied by illustrations in the pencil-sketch style of illustrator Jules Feiffer.
Together, Lara and Allison taped the students reading their chapters in front of the green screen, and in post production, they added the Feiffer-inspired sketches, creating the effect of the students actually reading from inside the story. “The project gave the students a more authentic sense of purpose and elevated the experience,” Lara notes.
The fifth graders in Danny Chin’s French class expanded their study of Parisian architecture with a project where they designed, cut, and painted their own rose windows, inspired by the circular stained-glass windows found in Gothic cathedrals and chapels like Notre Dame and Sainte-Chapelle. Using the 2D Design program and geometry skills learned in math class to navigate the shapes and degrees of rotation, each student designed a pie-shaped piece of stained glass that could be rotated and replicated to form the circular design of a rose window. The teachers used the Innovation Lab’s laser cutter to produce each design in acrylic, and the students used nail polish to give the final product both the glossy bright color and the imperfect rippled quality of 13th-century stained glass.
Upper School: Design as Empathy
By Upper School, Creators Class is part of the regular rotation schedule, and students are learning how to design for a specific audience rather than just themselves. David Dixon focuses on the importance of the “design brief” as a way for students to begin to understand the requirements of a particular challenge and the needs of the project as expressed by the “client.” The projects that students tackle across the grades range from tea-light candle holders that must be both safe and attractive to totem poles and clocks. Most importantly, the skills that students develop over the course of these projects—creativity, resourcefulness, resilience, and empathy—come into play when they tackle creative challenges in other academic disciplines.
In math teacher Cassandra Papalilo’s Algebra 2 class, students incorporated this year’s schoolwide theme of “Making a Positive Difference” by taking pictures from past ninth grade service trips to the Dominican Republic and reproducing them entirely with equations. Using 11 different parent functions—lines, quadratics, hyperbolas, logarithms and exponentials, to name a few—students painstakingly created an equation for each line and shape within the photo and plugged it into Desmos, an online graphing calculator. Two students logged over 500 equations each! The Desmos image was then transferred to the 2D Design program, and the images were sent to the laser cutter to be etched into wood. “The process felt overwhelming in scale at times,” says Cassandra, “but the students felt so accomplished when they were finished.”
In Deb Smith’s English class, ninth graders delved into the imagery of Macbeth to find a visual symbol that represented the play. Deb asked her students to avoid the obvious images of daggers and crowns and to identify something unique that spoke to them. Using CAD software, each student created a design that included the image along with text from the play, and then each design was cut into plexiglass. “The project was a good exercise in creating a visual representation of complex ideas,” says Deb.
Through projects like these, Fay’s teachers are showing students how to think like designers, and the result is often a seismic shift in perspective. A blank slate is not a cause for panic: it’s an opportunity for creativity. “Not knowing” is not a lack of intelligence: it’s the beginning of a journey. And failure is not a source of shame but rather an opportunity to evolve and improve.
Back
ABOUT
FAST FACTS
MISSION & PHILOSOPHY
FACULTY & STAFF
CONTACT
WORKING AT FAY
CALENDAR
BLOG
PRIVACY POLICY
ADMISSION
ADMISSION EVENTS
APPLY
AFFORDING FAY
VISITING CAMPUS
PROGRAM
ACADEMICS
ATHLETICS
ARTS
BOARDING
ENGLISH LANGUAGE PROGRAM
SECONDARY SCHOOL COUNSELING
DIVERSITY, EQUITY, AND INCLUSION
DISTINCTIONS
CREATIVITY AND DESIGN PROGRAM
PUBLIC SPEAKING
CHARACTER MATTERS
CIRCLES OF CONNECTION
GLOBAL COMMUNITY
LEADERSHIP
NINTH GRADE PROGRAM
DEDICATED SERVICE
48 MAIN STREET
SOUTHBOROUGH, MA 01772
main number 508-490-8250
admission 508-490-8201