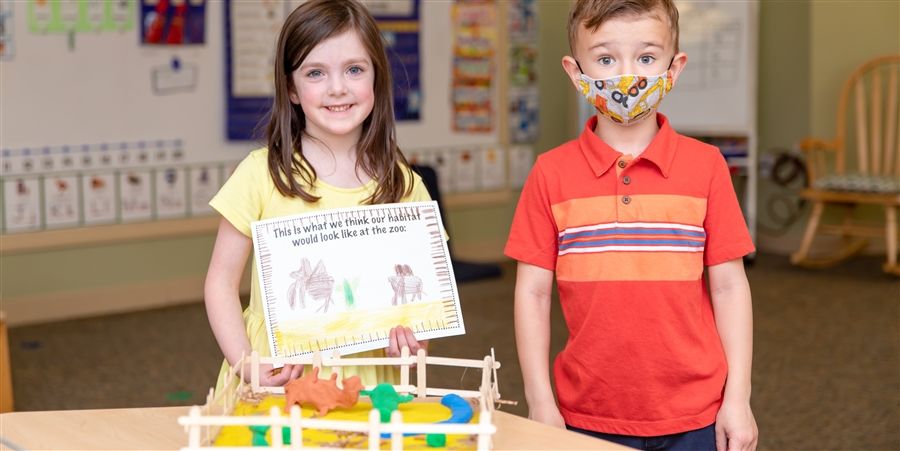 Kindergarten students were inspired by their visit to the Franklin Park Zoo earlier this month to learn more about the animals that they saw. Working in teams of two, students were assigned an animal to research with the goal of understanding what each animal needs to have in their habitat to survive. Creativity and Design Teacher Andrew Shirley joined the Kindergarten classes to explain that they would take all the information they gathered and use it to build a replica of their animal’s habitat.

Students were assigned various animals, from walruses and penguins to camels, peacocks, and tamarinds. Using Epic Books, students researched their animals, focusing on their preferred foods, style of shelter, environment, and what kind of access they would need to space and water. Students used a planner to compile and organize their information. They drew pictures to show what the animal looks like, where they live in the wild, and also what their habitat looks like at the zoo. They also documented what their animal eats, when it sleeps, and the materials the students would need to build their habitat. Once they had gathered the necessary information, students worked with their partners to create a habitat with everything their animal would need to be happy and healthy.

Kindergarteners were given various materials to build their habitats, including cardboard boxes for diorama-style habitats. Students could paint the background, incorporate other recycled materials like toilet rolls for logs and trees, build with model magic, and use shredded paper for grass and colorful pom-poms for bushes. As students were building this week, they were excited to show off how much they knew about their animals. For example, the camel team was making two camels out of model magic because they learned that camels are social animals that like to live in herds. The snake team provided lots of loose grass in their habitat for their snake to hide under and placed some mice nearby in case he got hungry. There was plenty of water for swimming and hunting seals in the polar bear habitat and some large chunks of white foam to represent the sea ice where polar bears live.
Back
ABOUT
FAST FACTS
MISSION & PHILOSOPHY
FACULTY & STAFF
CONTACT
WORKING AT FAY
CALENDAR
BLOG
PRIVACY POLICY
ADMISSION
ADMISSION EVENTS
APPLY
AFFORDING FAY
VISITING CAMPUS
PROGRAM
ACADEMICS
ATHLETICS
ARTS
BOARDING
ENGLISH LANGUAGE PROGRAM
SECONDARY SCHOOL COUNSELING
DIVERSITY, EQUITY, AND INCLUSION
DISTINCTIONS
CREATIVITY AND DESIGN PROGRAM
PUBLIC SPEAKING
CHARACTER MATTERS
CIRCLES OF CONNECTION
GLOBAL COMMUNITY
LEADERSHIP
NINTH GRADE PROGRAM
DEDICATED SERVICE
48 MAIN STREET
SOUTHBOROUGH, MA 01772
main number 508-490-8250
admission 508-490-8201