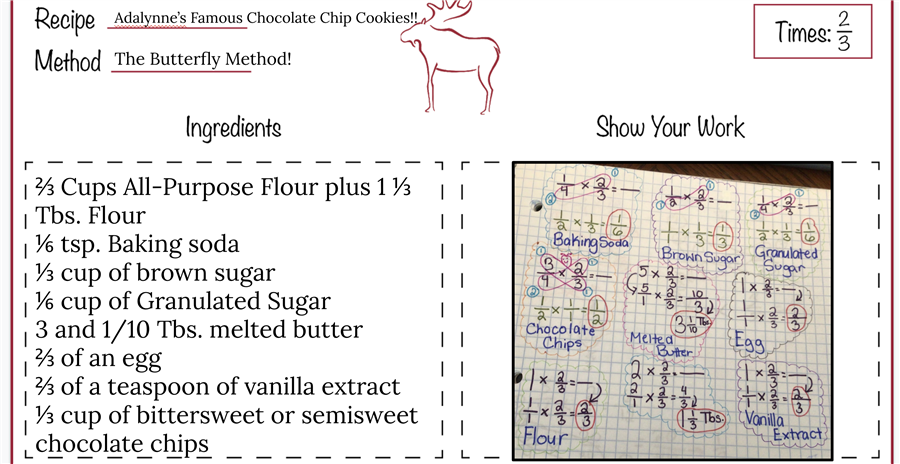 This month, sixth graders are showing off their mastery of multiplying fractions with a unique project that showcases their mathematical and culinary skills!
Math teacher Emily Sampieri assigned her students the challenge of selecting a special family recipe and then creating five different variations to submit to the class cookbook. Why would anybody want five versions of the same recipe? Well, as any cook knows, multiplying fractions is an essential skill when you want to make a smaller or larger version of a recipe. So, Emily asked her students to submit the original version of the recipe (which must include at least five different ingredients) and four additional variations. On separate recipe cards, they needed to use the three different multiplication strategies they have learned, repeated addition, the waffle method, and the butterfly method, to multiply the original version of the recipe by 2, by ½, by ⅔, and by 1 ½. Finally, students created a video of themselves making one of the new versions of their family recipe and explaining how they calculated each ingredient amount. Click here to watch Ada M. ’24 explain how she makes her delicious chocolate chip cookies and how she calculated the math behind her recipe!
Parents are sometimes frustrated by different problem-solving methodologies and prefer to use the traditional algorithms that they remember from school. However, exploring each new skill with different strategies is critical to building a solid foundation of understanding notes Emily. “Every student has a different entry point, background, schema, and perspective. The more ways we can show them the same idea, the more likely it is that it will click,” she says. Before Emily introduces students to the traditional algorithm for multiplying fractions, she introduces them to some strange and fun sounding strategies. She teaches students to multiply fractions through repeated addition, where they do lots of modeling to visualize and manipulate fractions and start to understand that multiplying a number sometimes makes it smaller. Then she introduces the waffle and butterfly methods, which give students two additional visual strategies to solve the same fraction problems. “We’re taking the time to build conceptual understanding, to play, to make mistakes, to visualize and make connections before students learn the traditional algorithm,” says Emily. “They start to recognize the patterns themselves, and when we get to the traditional method, it just comes more organically.”
Back