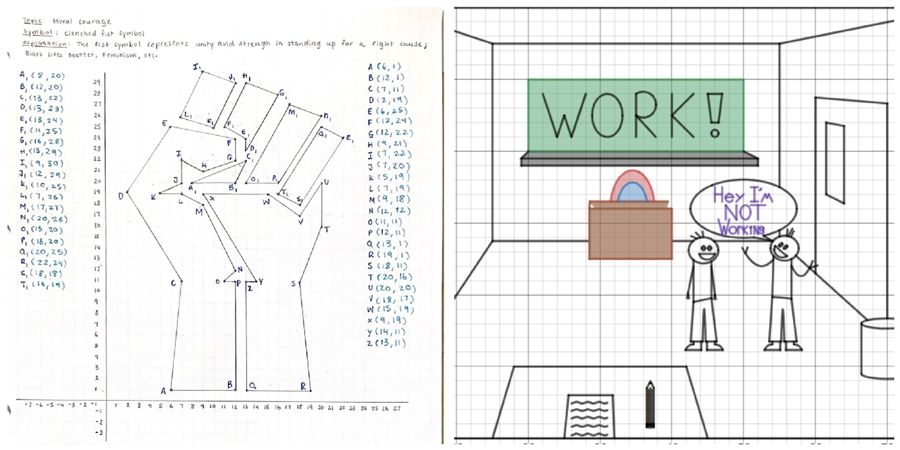 Upper School students in Extended Topics in Algebra and Geometry (ETAG), Algebra 1, Algebra 2, and Pre-Calculus have created line and function design projects that incorporate Fay’s school year theme of moral courage. In Algebra 1 and ETAG, the Line Design project challenges students to take an image and reproduce it entirely with linear equations. Students create an equation for each line and shape within the image and then plug it into Desmos, an online graphing calculator that recreates the image. Math and moral courage might seem like an unusual combination, but the challenge of distilling their reflections on moral courage into a single image provoked some great class discussions while encouraging students to challenge their mathematical skills.
Craig Ferraro’s ETAG class is a group of seventh and eighth graders who take the equivalent of Algebra 1 and Geometry in a single year. Students spent a class period talking about morality and moral courage and how those themes connect to life, history, and culture. Students discussed where their morals come from, identifying family and school as places where those ideas are formed and nurtured. Craig challenged them to reflect on their life experiences and depict a moment when they witnessed moral courage in their design. “Mathematically, this is a pretty high powered class, so they were also able to incorporate non-linear elements and animations into their designs,” says Craig. Students reflected on their designs and why they chose them in short essays to accompany their images. Writing about his design, Carey H. ’22 noted, “Moral courage is doing the right thing when it is often easier to do the wrong thing,” connecting it to the challenge of staying focused on schoolwork when there are so many other distractions.

The mathematical complexity of these design projects reflects the progression of the Upper School math curriculum. In Algebra 2, this project is called the Functions Design because students must incorporate eight different mathematical functions: Linear, Absolute value, Quadratic, Square root, Cube root, Cubic, Exponential, and Rational and/or rational inverse functions. In Math Department Chair Cassandra Papalilo’s Algebra 2 class, students presented their final designs in videos that they shared with their class and talked about why they chose their particular design, how it fits the moral courage theme, and how they created their specific function design. “Algebra 2 students have already solidified their linear skills, and this project pushed them to think beyond and use higher-order functions,” says Cassandra. “Not only did students reflect on world issues around them, but they made connections between mathematics and art and reflected on how these are intertwined with history and social justice.”

Attend an upcoming virtual admission event to learn more about our academic programs.
Back