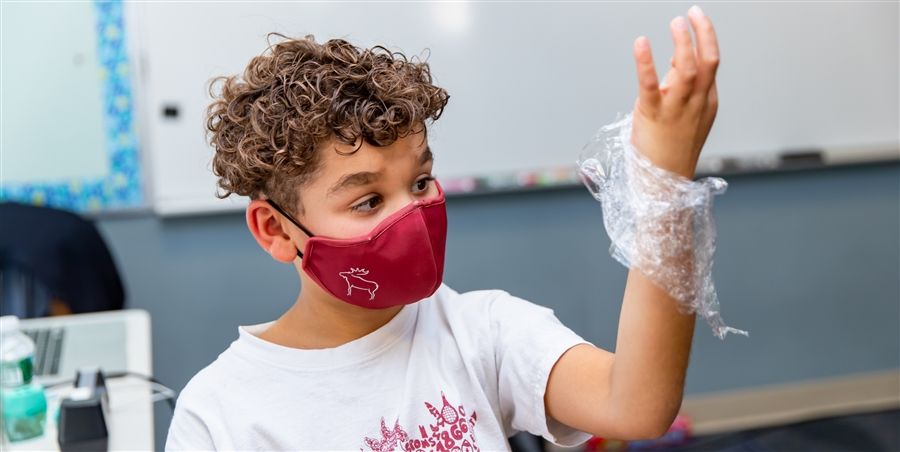 Hands-on exploration is an essential component of scientific learning at Fay. Recently, third grade scientists in Tim McCauley’s science class have been experimenting with creating their own static electricity as they expand their foundation of knowledge about electricity and magnetism.

When Tim demonstrated the effect produced by a balloon rubbed vigorously on a student’s head, most students recognized that it was static electricity causing the hair to stand on end. But where did it come from? What we can’t see, Tim explained to his class, is the effect that rubbing the balloon and hair together produces on the negatively-charged electrons contained in each object. When the two are rubbed together, the electrons start to move together and get organized. They accumulate on the balloon, leaving the hair with a positive charge. Like magnets, the positive and negative charges are attracted to one another, producing the static effect.

Watching the effect is one thing, but students were eager to see if they could create it themselves! For the first part of the experiment, each student stood to the side of their desk while Tim walked around, distributing thin sheets of Saran wrap. Students were asked to make the plastic wrap as flat as possible and then pick it up. There was nothing remarkable to observe. Then, Tim gave each student a “magic paper towel,” and instructed them to crumple and uncrumple it a few times and then hold it from the center like a paper Halloween ghost. He asked them to lightly and quickly rub it across the Saran wrap. As they rubbed, students commented on the changes they observed: the plastic wrap was puckering and getting more wrinkly as it started to cling to the tabletop. What was happening? As the paper towel is rubbed over the plastic wrap, it loses electrons, and the plastic wrap gains them. With a final exhortation to “charge, charge, charge,” Tim counted down from ten and then asked students to pick up the Saran wrap from the two closest corners. Students squealed as the plastic wrap swung towards them.

Next, they laid it back down on the table and charged it again. This time the students picked it up from just one corner and watched as the whole sheet quickly swung up to stick to their arm attracted to the positive charge. Finally, Tim had them charge it one more time with the paper towel and pick it up from opposite corners. Observing the behavior of the two negatively charged sides of the plastic wrap produced the biggest reaction from students. They let out a collective, “Whoa!”  as the two sides, repelled by one another, floated horizontally and then dipped down like bird’s wings to meet a hand placed underneath, straightening again as soon as the hand was removed.

In the past, students might have worked in groups on these kinds of experiments, but the necessity of keeping students distanced this fall requires a different approach. However, students clearly enjoy the thrill of running their own scientific investigations. Class ended with several students plaintively asking, “Mr. McCauley, can we have another hour?”
Back