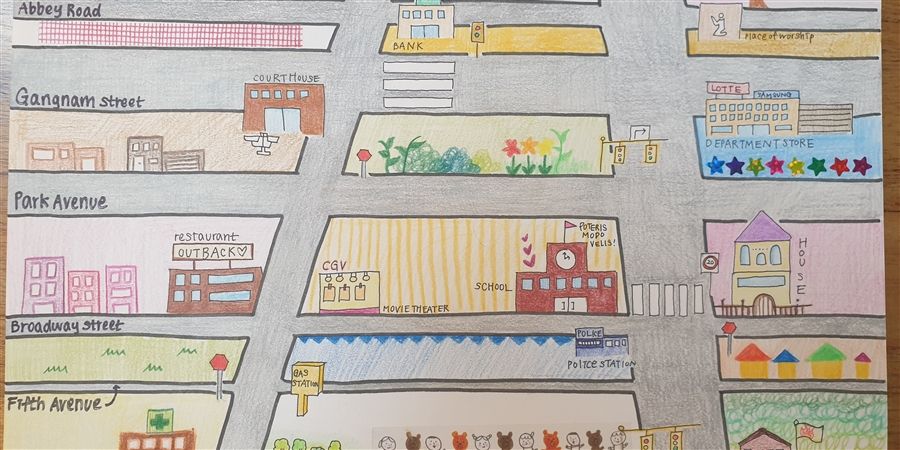 Primary School
As we get closer to the end of the school year, Primary Schoolers are enjoying a variety of activities together as a community. Eighth grader Lulu Mohn read Beatrix Potter’s Peter Rabbit to students on Tuesday, and on Wednesday they celebrated World Bee Day with a live talk about bees with Ms. Mertz, Fay's World Languages Department Chair, who is also a beekeeper. On Thursday, Primary School students talked about the importance of showing gratitude as they met in groups to create some special thank you cards.
Kindergarten students are hard at work on their “All About” books, as they research the topics that they will be writing about. Students are researching robots, lions, and dentists, among other subjects! In science, students are conducting a pinto bean experiment. Using beans and bags sent to them by Ms. Porter, they are learning about the growing process by tracking and observing the growth of their own bean. Kindergartners were also immersed in the work of Claude Monet this week as Ms. Blais taught them about impressionism and asked them to draw or paint a picture in Monet’s style. In French, Ms. Overstreet read them Claude Monet Sunshine and Waterlillies, a book about Monet’s life and work. She also challenged them to pick a spot outside and draw it at two different times of day to see how the light changes the image.
First-grade students are learning how helpful graphic organizers can be in incorporating the essential parts of a fictional story like character and setting. In math, students were introduced to fractions and spent the week creating fraction flowers, playing fraction Bingo, and doing a fraction pizza project. In library, Ms. Knowles read Camp Tiger by Susan Choi and asked students to reflect on something that they can now do by themselves that they couldn’t do at the beginning of the year. In music, first graders had the chance to try the music learning site, MusicFirst Junior, and practiced using their musical ear to detect if a piece of music is moving the same, in steps, or in big leaps.
Second-grade students are exploring personal narratives in literacy. This week, they learned how to “hook” a reader with dialogue, write a great introductory paragraph, and about the elements of a “mighty middle.” In science, students have been researching animal adaptations. After learning about the adaptations of owls, frogs, armadillos, and bears, Ms. Frazette challenged her students to design an animal that is perfectly suited to its environment. Primary School students have been staying active and fit this spring as Coach Jack Wong shows them a variety of new exercises. This week featured leg lifts, wall sits, jumping inchworms, and push-ups! Next week, second-graders will be performing in Iggy Peck Architect, Fay's first-ever virtual play. We can't wait to see it!
Lower School
Third-grade speeches are on Wednesday, May 27, and Thursday, May 28, and the students are very excited to give their first speeches at Fay! In math, third graders listened to the book 17 Kings and 42 Elephants. They used words, numbers, and pictures to explain their thinking as they figured out how many elephants each king would get if they shared them equally. In science class, students continued their exploration of the solar system with visits to Saturn and Jupiter. Third graders were also busy making Flipgrid videos this week telling second graders, “The best thing about coming up to Lower School!”
Fourth-grade social studies is wrapping up its immigration unit and learning about America as a melting pot of different cultures and ethnicities. Each student interviewed their family to learn about their heritage and how their family immigrated to the United States. They drew a picture of the flag where their family emigrated from, and Mr. Russell put them all together to make a big fourth-grade melting pot flag. [See the photo at the beginning of this article.]
Fifth graders are working on fractions in math and reading The Breadwinner with Mrs. Fearey. In science, students have been learning about airplane design. Students had to make two paper airplanes, reflecting different designs, compare them, and make predictions about how they would fly before testing them in Thursday’s class. In fifth grade Spanish, students are wrapping up a hands-on, creative project to reinforce "House" vocabulary. They were asked to build a space shuttle that could accommodate a team of Spanish-speaking astronauts on a mission to Mars by using items around their homes ranging from Legos and blocks to items found in their recycling bins. After building their shuttle, students uploaded pictures of their spacecraft to a Google Slides presentation, wrote a sentence describing each room, and labeled the furniture in each room. Mr. Kimball’s fifth-grade visual art class, students are designing comic book covers. The cover should feature a new hero with special powers to help the world with the problems that it has right now.
In sixth grade, students are starting division with decimals, finishing up science experiments that they designed themselves. In Ms. McGinty’s art class, students are continuing their exploration of one-point perspective as they create drawings of their bedrooms. In sixth grade World Language, Spanish and French students have been using a new Google Chrome extension that allows students to record their voices on Google docs. This is an opportunity for students to continue to practice their pronunciation and listening comprehension skills during distance learning. Mr. Claire’s art class, students are creating a “map of their world”  using satellite images of their home from Google Maps. Students are including a larger map of their street and surrounding area and then a smaller one that shows their house and a favorite place to hang out.

Upper School
Seventh-grade students in Life Science are learning about the immune system, and this week they created a short comic strip that shows one of the specialized immune cells they have been studying in action. Ms. Argueta’s French 1A class completed their family tree project this week. Each student created a slideshow and video with an oral presentation of their work as they described key members of their family and their relationship. Mr. Claire’s seventh-grade art class is working on a special project based on kindness, the theme for this year’s Mental Health Awareness Week. Seventh-grade students wrote about an act of kindness they had witnessed recently and found a piece of art that reflects it in some way. This week, Pre-Algebra Advanced students created fictional cities to demonstrate their understanding of their geometry unit on angles, parallel lines, and transversals. Students were required to incorporate six parallel streets as well as two non-parallel transversal streets and place their buildings in sets with specific angle relationships.
Latin I students have completed their Roman Architecture Projects. In addition to the research about their structure that they compiled into their Google Slideshow presentation, students recreated their structures using objects from around their home! [See a photo of a recreated Roman Forum at the top of this article.]
In Creators class, eighth graders have been exploring line, color, and form, three crucial elements of design, by creating sculpture with strips of paper. In Ms. Maslak’s English class, students watched spoken word poetry performances; they analyzed the use of metaphor, allusion, and the ways in which the poems connect to the theme of identity.  In Dan Blanchard’s Ancient History classes, students are working on a Roman Archeology and Imperialism Project. Students select a piece of Ancient Roman archaeology, ranging from tombstones, monuments, and prominent sculptures to a legionary fortress, and a frontier town in Algeria. They research the history surrounding the piece, focusing primarily on understanding the effects of Roman imperialism. The project focuses not only on the Roman perspective but on how imperialism impacted the people in various locations that are connected with their archaeological topic. Each student then has the opportunity to choose how they express their understanding, either through a pro-Roman or anti-Roman propaganda poster or in crafting a historical fiction short story or graphic novel.
Sarah Ripton’s ninth-grade English class wrote a sonnet together as a class this week reflecting on their collective emotions as they prepare to depart Fay this year. Then students wrote individual sonnets on the same subject. Students in Mr. Buteau's geometry class were sharing their solutions to a "rope" problem this week. Given a hundred feet of rope to arrange into a perimeter, students had to decide whether a square or circle shape would give them a greater area. Students had to film their solution, including their problem-solving process, and share their thoughts on whether their answer would always hold true and why. Mr. Beloff’s Topics in Modern America students are starting their final projects. Students will collectively chronicle the final ten years of the Cold War by focusing on seminal events of the 1980s such as the Iran hostage crisis, the U.S defeat of the Soviet Union in the Miracle on Ice, the assassination attempt on Reagan, and the rise of MTV and pop music.
Back