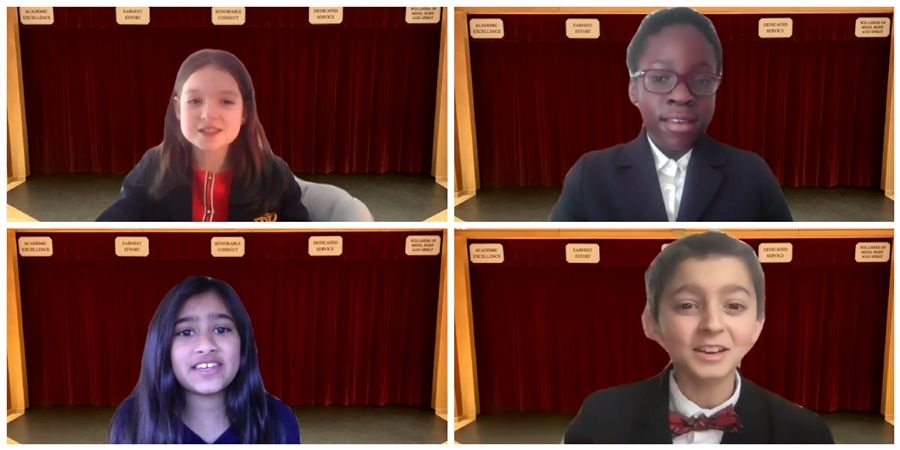 This is Who We Are

Fay’s fourth graders made school history this week as the first class to ever give their speeches virtually! Gathering via Zoom, along with Head of School Rob Gustavson, Head of Lower School Lainie Schuster, faculty, family members, and classmates the fourth-grade students donned their school dress and blazers and gave their speeches in front of a virtual backdrop of Harris Theater. Once they started speaking, it was easy to forget the computer screens as students took turns sharing personal stories and reflections about an essential character trait that helps them “to be their best self.” As Anny W. ‘25 noted in her introduction to the 4-1 speeches on Wednesday, “This is a journey into what makes us, us.”
In writing their speeches, students went through a multi-step process guided by fourth-grade teachers Ward Russell and Sam Thorburn. “Before writing, the students needed to look inside themselves and figure out what their character traits are and which one they wanted to talk about,” notes Ward. The fourth graders used worksheets, questionnaires, and other tools to identify some of their defining character traits and had class discussions about how many character traits combine to make up one’s personality.
To narrow all the character traits down to a single one, Sam and Ward asked students to think of a specific time in their lives when that trait was on display. “It challenged students to dig deeper into the story to find the meaning behind it,” says Ward.
Students approached the writing process by breaking the speech down into three chunks: a bold opening to grab the audience's attention, a central story to illustrate their character trait, and a strong finish to leave the audience with a lasting impression. One of the hardest things for the students to do, notes Ward, was to understand that the speech wasn’t about their story - it was about that important aspect of their character. Students had to do plenty of revising and editing to ensure that all the feelings and emotions within the story that highlighted the character trait were on display.
Students worked on their presentation skills and rehearsed their speeches using Flipgrid to record and evaluate themselves, holding a final dress rehearsal before the big day. Section 4-1 gave their speeches on Wednesday, May 13 and Section 4-2 will give theirs on Monday, May 18.
The speeches included funny stories about taking responsibility for a mischievous new puppy and dramatic tales of bravery discovered on the high wire of a ropes course. As Lainie Schuster noted after 4-1's speeches, the character traits that the students saw in themselves are ones that are also highly valued in our school community. “Being brave, being determined, being helpful and kind, being positive, being thoughtful, and being honest - this is who we are as a Lower School.” Click here to listen to excerpts from the fourth-grade speeches.
Click here to learn more about the distance learning program at Fay.
Back