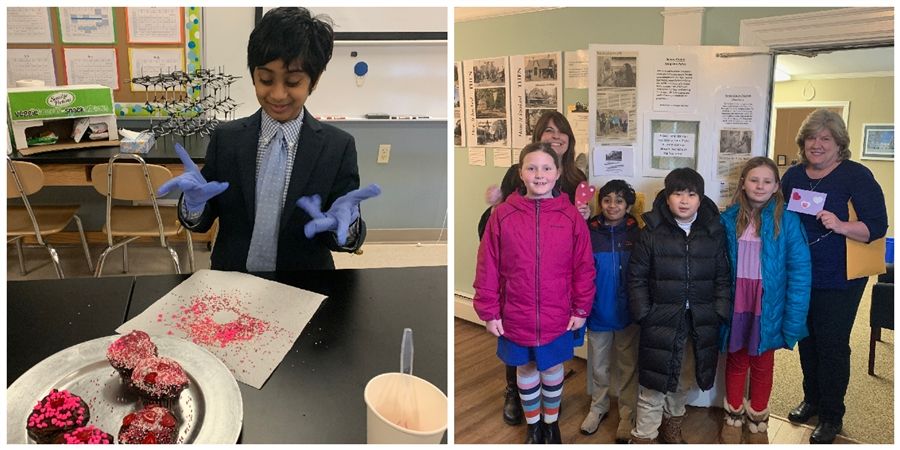 The Power of Kindness

The Lower School Service Club has been spreading positivity throughout the Fay and local community this term, and they're not done yet!
Under the supervision of Anne Hart, the Assistant to the Head of Lower School, the club began the winter term by mapping concentric circles of influence to guide their efforts each week. The students started close to home - literally - by doing small things to help out around the house like cleaning up their room without being asked or thanking a parent for dinner. Then they expanded their efforts to include their classroom at Fay, choosing someone either at home or at school who they are grateful to and writing them a thank you note. Next, they moved on to the Lower School community, the Fay community, and the town of Southborough, and they will finish the term with a project that they hope will benefit the local area. "It's like throwing a rock in the water," says Anne, "the ripples start close to home and gradually expand to sharing appreciation, understanding, and empathy with your classroom, the Lower School, the Fay community, and beyond."
The Service Club has been busy this term. They wrote encouraging post-it notes to paste on the cubby of each Lower School student. They made Valentines for Southborough seniors that will go out with the Meals-on-Wheels program. They also made cupcakes and Valentines to thank Fay's hard-working facilities crew for everything they do to make the campus a beautiful place. Anne begins each weekly meeting by sharing a book that connects to that day's activity. For example, before writing the Lower School notes, she read The Invisible Boy by Trudy Ludwig, a book that shows how a kind word can change someone's view of themselves or their day. After each project, they also spend time considering the impact of their work, what they noticed, and how they think the recipient of their kindness felt. Already, they have seen how small actions can make a difference. When they delivered their Valentines to the senior center, the director pointed out to them that their card will be the only one that many of the seniors will get.
Next week, the club will announce their final project and make a presentation at Lower School Morning Meeting. They will be collecting food and supplies to deliver to the Baypath Humane Society in Hopkinton, Mass. which takes care of many local cats and dogs while they wait to be adopted into forever homes. "Their ideas and interests have driven the club," says Anne, "and it has raised their consciousness of their collective ability to make a difference."
Back