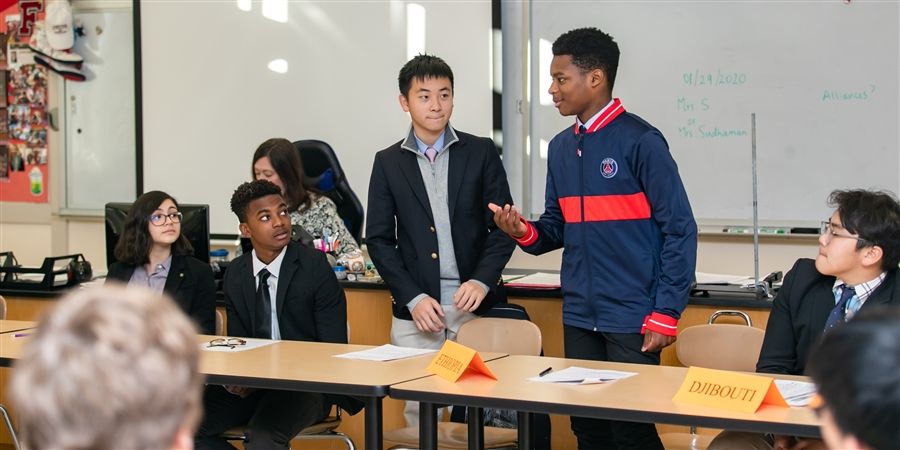 Students in the ninth grade elective, Diagnosing the Modern World (DMW), have been immersing themselves in the real-world challenges posed by a new hydroelectric dam under construction on the Nile River in Ethiopia. Egypt fears that Ethiopia's new dam, 2,000 miles upstream, will reduce their water supply, 90% of which currently comes from the Nile. Ethiopia views the new hydroelectric dam as equally essential to the expansion of their infrastructure, as the majority of its citizens still live without electricity. After learning about the Egyptian economy and the negotiation process, DMW students recently staged a mock negotiation process that mirrors diplomatic negotiations currently being brokered by the White House and World Bank.
DMW is an interdisciplinary history and science course that is team-taught by Emily McCauley and Adel Collins. Each term focuses on a specific topic or issue of particular importance to the world today and into the future. Students examine these topics from both scientific and historical perspectives and explore the interconnectivity and complexity of the problems that confront the world. Previous subjects have included disease, waste, food, and war.
To give students an understanding of the importance of the Nile to the Egyptian economy and culture, music teacher Jay Besch recently joined DMW students to share the knowledge and experience he gained growing up in Egypt. Jay explained the critical importance of the Nile to Egypt's agrarian economy and population, 95% of whom live along the Nile. Joining the class via Skype was Jay's sister, Brianna Besch, who currently works for the Environmental Protection Agency and has attended UN negotiations. Brianna provided background on the issues associated with water rights, dams, and hydroelectric power in the region as well as insight on what the negotiation process often looks like and the importance of bringing the right mindset to a negotiation.
This work laid the foundation for DMW students to research the impact that this issue poses for each country in the region. Students worked in pairs to participate in a mock negotiation of a water-use agreement among several of the countries that share the Nile, including Egypt, Ethiopia, Kenya, and Sudan. There were also students representing an environmental impact group and an agricultural advocate. Two students chaired the negotiations, calling on countries to speak when they raised their cards, asking for responses, and calling votes on individual motions when appropriate. While some representatives were inflexible, others floated offers of trading oil or access to ports to try to tease out an agreement. "Students got a taste of just how difficult this process can be when multiple parties with different, yet all very relevant, interests are involved," says Adel. "They gained experience revisiting issues, looking at different points of view, and even trying to form alliances to advance their country's priorities."
With the mock negotiation process behind them, students are now writing up an analysis of the experience, using the sources that they drew upon during their earlier research to explain why the simulation succeeded or failed. "It's been great to see the kids taking their respective roles seriously and coming into the negotiation well-prepared," says Emily. "That really helped to make the experience all the more meaningful.”
Back