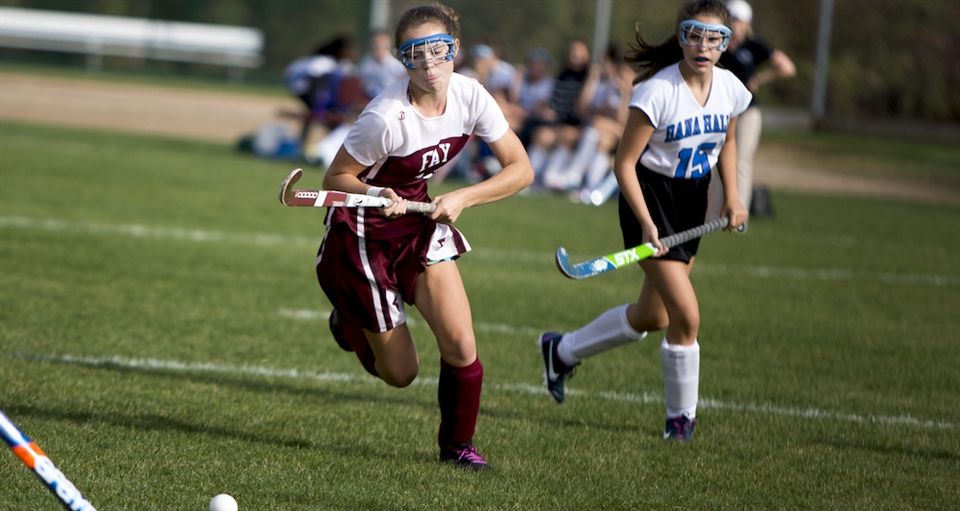 While the Fay athletics program is an excellent place for a student to start their athletic career or try something new, it is also a program that supports elite athletes who want to compete at a high level at Fay and beyond.
“Fay’s program serves strong athletes really well,” says Athletic Director Rob Feingold, who also coaches boys varsity soccer and lacrosse. “Just as we support talented musicians and students who excel in the classroom, we also support our athletes with strong coaching and a competitive athletic schedule that mirrors what they will see in secondary school.” We recently sat down for a conversation with Rob and Matt Greene (Admission Officer, Athletics Liaison, and head coach of boys varsity soccer and varsity softball) to talk about how the Fay athletic program challenges and develops strong athletes and supports them through the secondary school application process.
How do Fay athletes balance their academic and athletic commitments at Fay and outside of school?
Rob Feingold: We promote, support, and value multi-sport participation at Fay.
Our schedule allows kids to pursue outside athletics in addition to their sports at Fay. I would say that close to 50% of our Upper School day students also play sports outside of Fay.
Matt Greene: We have limited weekend commitments at Fay, and while most secondary schools play on the weekends, athletes who come to us for eighth and ninth grade don’t have that same conflict. Our coaching staff also works hard to support boarding students who play outside sports. I’ve personally connected with club coaches and programs and worked with parents and families to coordinate rides and transportation.
What are the highlights of the Fay athletic program for the competitive athlete?
Rob Feingold: We have strong teams across the program, and in addition to our regular-season games, our athletes get to participate in our Friday Night Lights events in the fall and winter as well as in many longstanding junior school tournaments. We hire experienced coaches, and through the teacher/coach model, our players and coaches develop strong relationships on and off the field. Our players and teams also benefit from the ability to train together daily, and they have access to certified athletic trainers and excellent facilities.
How does Fay prepare its athletes to play for independent and high school athletic programs?
Rob Feingold: Many students come to Fay to prepare for attending an independent secondary school. Just as we prepare our students academically for what they’re going to see in the secondary school environment, we also prepare them for secondary school athletics.
Matt Greene: I talk about this a lot with my players. Some athletes have all the talent and the ability in the world, but they still have work to do in order to get to the next level. I want them to be the player that a coach wants on their team, not just because they score goals and are talented, but also because they balance their skill with the ability to listen, respond to coaching, and be a good teammate. We do that really well here. Much of our work as coaches is focused on managing those high-talent athletes and getting them ready for the secondary school environment.
How does Fay support its athletes in the secondary school admission process?
Matt Greene: Fay athletes get a great deal of exposure to secondary school coaches through tournaments and playing against lower-level secondary school teams. Our coaches are also able to write recommendations to accompany a Fay athlete’s secondary school application. We know those players in a way that their club or town coach doesn’t, which carries a lot of weight and helps promote them to the next level. It’s the Fay benefit of having a strong network of connections in secondary schools. I keep in touch with high school coaches where I've sent players, and sometimes the coaches will reach out to me about a player.
Rob Feingold: When secondary school admission officers and coaches see a strong athlete who also has Fay on their resume, they know that the student is well rounded—academically, athletically, and emotionally. That goes a lot further than an application from a school that they are not familiar with or an athletic program they don’t know.
What we’re proud of:
• Tournament champions, 2018, 2019, 2020 Fenn Boys Basketball Tournament
• Undefeated seasons, Girls Varsity Tennis, 2012-2019
• Tournament champions, Cardigan Mountain Tournament (Wrestling), 2020
• Winner, Roxbury Latin Jamboree (Girls Cross Country) 2018
• Winner, Girls and Boys, Hillside Track and Field Jamboree, 2019
• Winner, “Split F” Fay-Fenn Football Tournament, 2010, 2011, 2012, 2013, 2014 and 2015, 2017, 2019
• 2nd place, Charles River Tournament (Girls Basketball), 2019
• 2nd place & tournament finalists at 2017 & 2019 Boys Junior School Lacrosse Championship
• Undefeated season (11-0), 2016 Girls Varsity Lacrosse
• Winner, Roxbury Latin Jamboree (Boys Cross Country), 2013 & 2014