The Foundation for a Meaningful Life
Kindergarten - Grade 9 in Southborough, MA
Athletics
Coaches 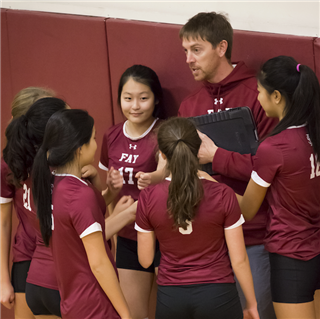 "The best part about coaching at Fay is getting to know the students outside of the classroom. Being a coach allows me to see another dimension of my students. This helps me be a better teacher - and it can often help them become better students."
Tim has many roles at Fay in addition to being a coach. He is the Science Department Chair, and he teaches students in third and fifth grade science in the Lower School. He also teaches Diagnosing the Modern World to Upper School students and serves as a Dorm Parent in the Village Dorms, where he lives with his wife (who is also a teacher and coach at Fay), son, and dog Max. Tim started playing volleyball in the seventh grade and continued to play throughout high school. In college, he switched sports and took up rowing, but he returned to volleyball during grad school at the University of New Hampshire. Tim still plays volleyball in leagues around Southborough and enjoys the competition it brings.
Back